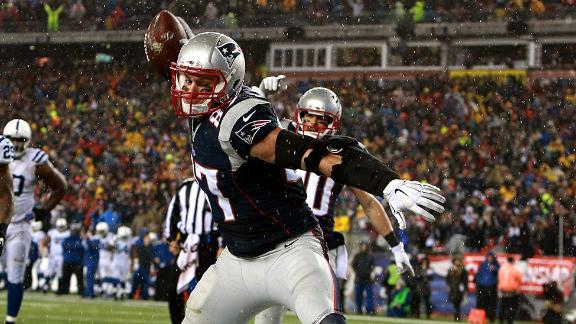 The NFL has found that 11 of the New England Patriots'12 game balls were inflated significantly below the NFL's requirements, league sources involved and familiar with the investigation of Sunday's AFC Championship Game told ESPN.

The investigation found the footballs were inflated 2 pounds per square inch below what's required by NFL regulations during the Pats' 45-7 victory over the Indianapolis Colts, according to sources.

"We are not commenting at this time," said Greg Aiello, the NFL's senior vice president of communications.

League sources have confirmed that the footballs were properly inspected and approved by referee Walt Anderson 2 hours and 15 minutes before kickoff, before they were returned to each team.

ESPN Sports Radio 810 in Kansas City reported that the Patriots' footballs were tested at the half, reinflated at that time when they were found to be low, then put back in play for the second half, and then tested again after the game. The report did not reveal the results of the test following the game. All of the balls the Colts used met standards, according to the report.

Meanwhile, a source told WEEI.com that the Patriots used 12 backup balls for the second half against the Colts after issues were found with most of the originals. Patriots spokesman Stacey James confirmed that the team had 24 balls total available, WEEI reported.

Under NFL rules, no alteration of the footballs is allowed once they are approved.If a person is found breaking league rules and tampering with the footballs, that person could face up to a $25,000 fine and potentially more discipline.

Troy Vincent, the league's senior executive vice president of football operations, told The Associated Press late Tuesday in response to this report that the "investigation is currently underway, and we're still awaiting findings." He told "Pro Football Talk with Mike Florio on NBC Sports Radio" earlier Tuesday that the NFL expected to wrap up its investigation in "two or three days."

Sources earlier this season told ESPN NFL Insider Adam Schefter that the Colts had concerns about underinflated balls after their regular-season game against the visiting Patriots on Nov. 16.

During that game, Colts safetyMike Adamstwice interceptedTom Bradyand gave the balls to the Colts' equipment manager to save -- and both times there were concerns about theballsfeeling underinflated, sources told Schefter.

Those sources said the Colts raised concerns to the league, which was aware of the issue going into this weekend's AFC title game.

Yet to be determined is what, if any, penalties may be imposed upon the Patriots. One source described the league as "disappointed ... angry ... distraught" after spending considerable time on the findings earlier Tuesday.

Part of the investigation that needs further vetting is how the 11 footballs became underinflated.

The balls are required to be inflated between 12.5 and 13.5 pounds per square inch and weigh between 14 and 15 ounces. Once approved by the referee, the balls are then put into ball bags and are set on the sidelines for each team. The ball bags are not guarded or watched in any way. When an official calls for a new football, a team's designated ball boy will get a new football from the ball bag and give it to the official.

"We have been in complete cooperation with the league and will continue to do so," James said.

The NFL began looking into the issue because doctoring the footballs could provide a competitive advantage, compromising the integrity of the game.

Deflating a football can change the way it's gripped by a player or the way it travels through the air. Under NFL rules, each team provides balls each game for use when its offense is on the field.

"When Gronk scores ... he spikes the ball and he deflates the ball. I love that, because I like the deflated ball," Brady said then of tight end Rob Gronkowski. "But I feel bad for that football, because he puts everything he can into those spikes."

Colts tight end Dwayne Allen, however, said on Twitter that the issue still didn't affect the outcome of the game.

This isn't the first time Belichick has been suspected of breaking NFL rules. He was fined $500,000 in 2007 for having an assistant spy on the New York Jets' defensive signals.

Special teams captain Matthew Slater said the Patriots "try to do things the right way. We work hard at our jobs, our professions, to be successful and it's unfortunate that things like this come up, but that's life, that's the world we live in."

Colts coach Chuck Pagano said he did not notice issues with the footballs and didn't specify when asked whether the Colts had reported the issue to officials.

"We talk just like they talk to officials [before the game]," he said. "We have an opportunity to talk to the officials about a lot of things."

Some Colts players -- punter Pat McAfee and cornerback Darius Butler -- took to Twitter on Tuesday night to give their spin on the situation.

Patriots wide receiver Julian Edelman said the footballs didn't feel different than usual. And defensive tackle Vince Wilfork seemed amused by the matter and didn't shed any light on it.

"I don't know anything about that," he said. "I don't touch footballs. I tackle people."

Packers quarterback Aaron Rodgers said on his ESPN Milwaukee radio show that he didn't like how referees who inspected balls before games take air out of the balls.

Hall of Fame wide receiver Jerry Rice voiced his opinion on Twitter, saying that all but one football being underinflated was too much of a coincidence.

11 Of 12 Pats Footballs Underinflated
ESPN's Chris Mortensen breaks down the NFL's finding that 11 of the Patriots' 12 game footballs were underinflated by 2 pounds for the AFC Championship Game.

Advantages Of Underinflated Footballs
Mark Brunell discusses the advantage of using a football that is underinflated and what he preferred to use when he played.