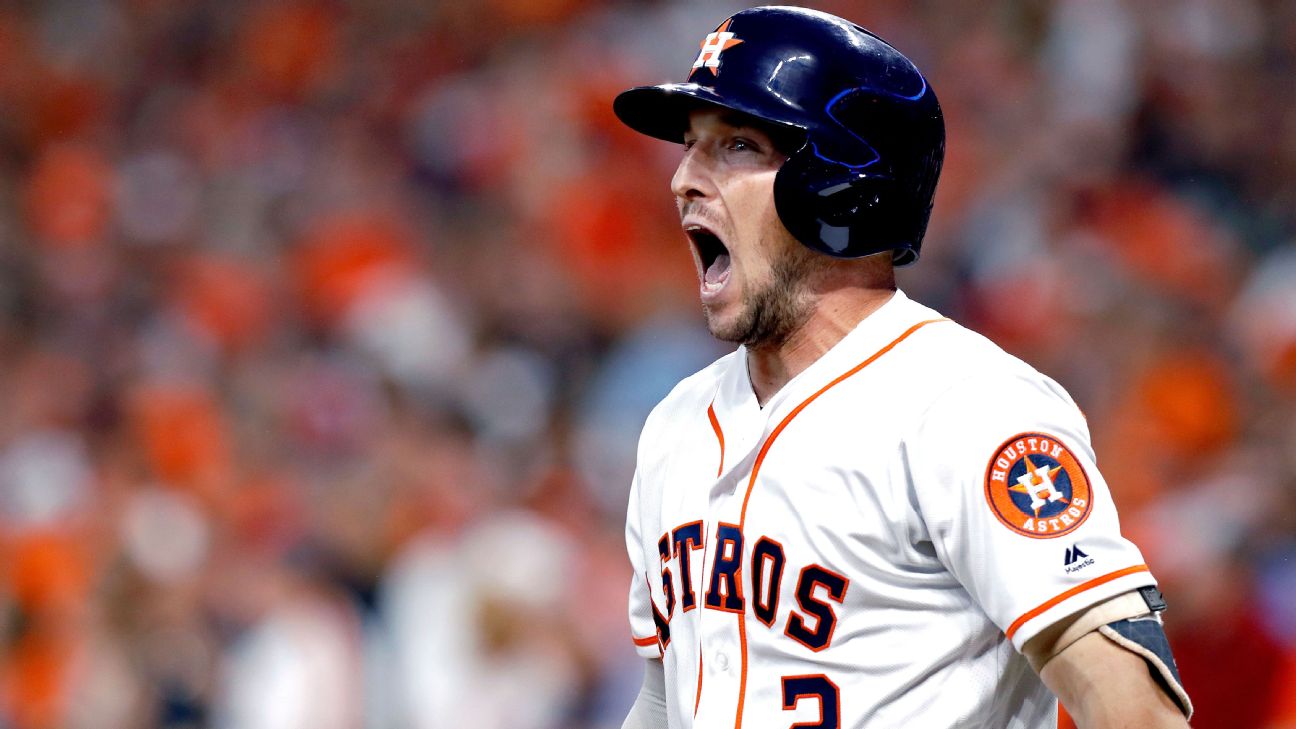 The results are in, and ESPN has determined Major League Baseball's top 100 players for the 2020 season. But not everyone is going to agree with who wound up where. In the wake of the release of this year's voting by 40 of ESPN's baseball experts, we asked three of our voters -- Bradford Doolittle, Sam Miller and David Schoenfield -- what their big takeaways were from this year's ranking of baseball's best at ESPN.com.

Which top-30 ranking is the biggest surprise?

Doolittle: Alex Bregman was No. 6 last season. Then he went out and finished second in Baseball-Reference WAR (bWAR), second in FanGraphs WAR (fWAR) and first in win shares. So going into his age-25 season, we drop him to No. 12. This makes no sense to me, especially if, as I suspect, he's getting some kind of sign-stealing scandal adjustment. If Mike Trout doesn't win the MVP again this season in the American League, Bregman is the most likely player in the league to take his place.

Miller: Blake Snell has pitched four seasons in the majors, and his ERA has been just a little bit better than the league average in three of them. Of course, the exception -- 2018 -- was one of the finest seasons a pitcher had in past decade, but even that season was hard to replicate, with a 1.89 ERA but just a 2.94 FIP. It's easy to see him in next year's top 10, but it's also easy to see him in next year's bottom 10.

Who didn't make the top 100 but should have?

Doolittle: We did a pretty good job of avoiding egregious omissions. The highest-ranked player on my list who didn't make it was Carlos Santana. I can kind of understand it. He's even more one-dimensional now than he has always been. He's going into his age-34 season. He doesn't play a premium position. But the guy can still really hit. He bounced back in a big way from 2018, a season that now looks like an outlier. A player you can pencil in for an OPS+ of 115 to 130 over at least 150 games is a top-100 player.

Miller: He's got a high-enough disaster rate that I understand why he's not in the top 100, but only 12 players in baseball produced more WAR per plate appearance than Byron Buxton did last year. He's got Andrelton Simmons' defensive value as a center fielder, which gives him a 3- or 4-WAR floor in any fully healthy season. And he hit an outrageous 30 doubles in fewer than 300 at-bats in 2019, hinting, perhaps, at even more power potential than his .513 slugging percentage showed.

Schoenfield: Just eyeballing it from last year's league leaders ... maybe Jorge Polanco of the Twins? He ranked tied for 14th in bWAR among position players at 5.7; fWAR had him lower at 4.0 (still 37th). I'm not sure why there's such a big difference there because bWAR rates him only slightly above average in the field with 2 defensive runs saved. Polanco did fall off a bit at the plate in the second half (but was still good), so maybe that's it. Still, he's the type of solid all-around player who is underrated.

At the end of the season, about what player will you look back at the rankings and say, "I was right, everyone else was wrong"?

Doolittle: We've got Aaron Judge at No. 15, down from No. 11. He debuted at No. 14 during his rookie season, the year we did the rankings after the campaign had started, and he was No. 16 the year after that. So we've had him between 11 and 16 over his four full seasons. I'd rate him more like No. 50. It brings me no joy to point this out, because I think Judge is good for baseball and his ascendancy to future Hall of Fame status would be a great thing. But his rookie season now looks like an outlier. He's really good -- awe-inspiring might be a more apt description -- when he plays but misses too much time.

Now it looks like Judge is going to be on the shelf again to open the 2020 season. The problem with his over-ranking is not just one of value lost from injuries. There is also the loss of repetitions to improve the extreme swing-and-miss tendencies he has shown, which lead to inconsistencies. He's already going into his age-28 season. Could he end up as MVP? Absolutely. But to cement his status as that kind of player, Judge needs to be on the field for 140 to 150 games. So I hope everyone else is right and I am wrong.

Miller: Shohei Ohtani's case as a designated hitter isn't really any better than Miguel Sano's case as a first baseman, and Sano isn't in the top 100. So Ohtani's position at No. 34 is being floated by his fame and hype, or by very high expectations for his pitching. I don't have particularly high expectations for his pitching. High hopes! But my expectations are cautious, as they would be for any pitcher with an injury history like Ohtani's. I might put him in the 80s.