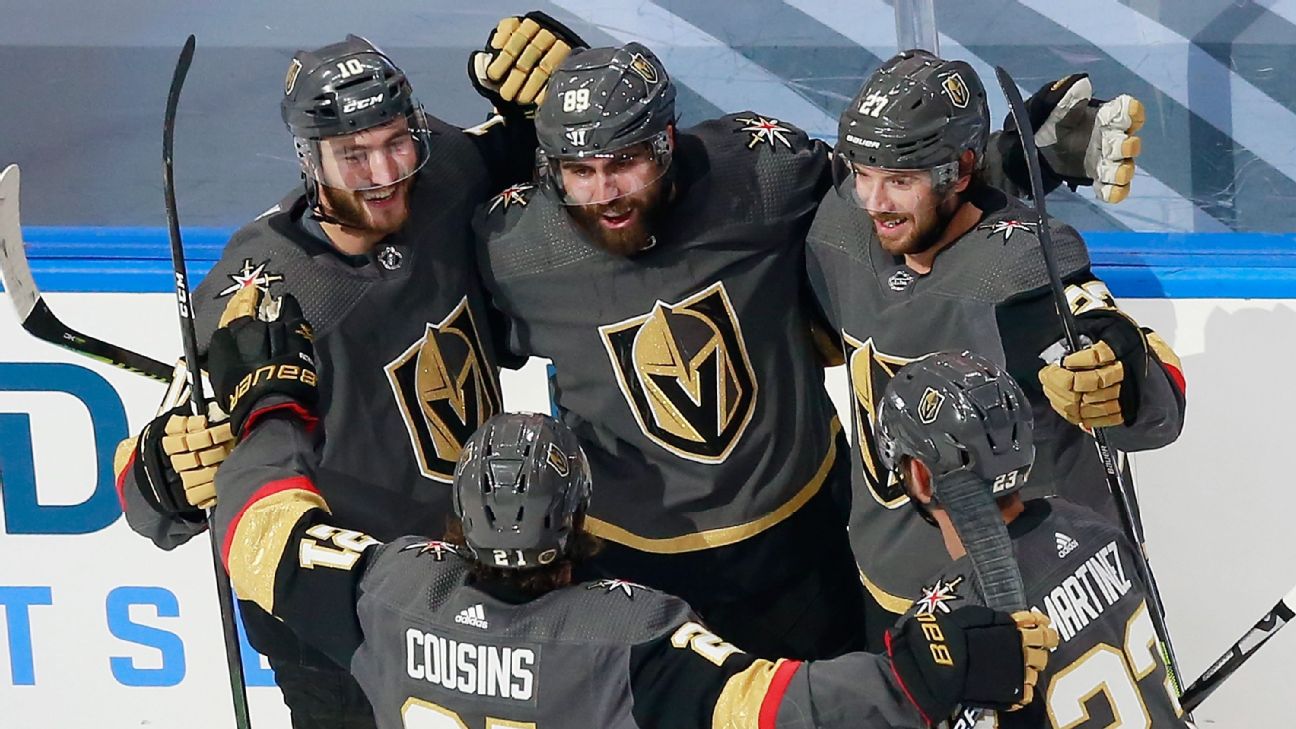 The Dallas Stars' five-goal rally produced the first 2-0 series lead of the conference semifinals. The Boston Bruins and Vegas Golden Knights have a chance to join them on Tuesday.

The Bruins and Lightning will play on back-to-back days for Games 2 and 3, and Games 6 and 7 if necessary. Boston coach Bruce Cassidy said "it's too early to tell" if 35-year-old Jaroslav Halak will start both contests; Dan Vladar -- with zero NHL starts -- would be tapped if Halak needs a rest. Tampa Bay coach Jon Cooper said the regular-season pause changes how he might approach his goaltending here. "In a regular playoffs, you'd have played 82 games. [Goalie Andrei Vasilevskiy] probably would have played 60 of them, and then gone through a playoff run. That hasn't happened," he said. "Now, if Game 2 goes into five overtimes, you've got a decision to make. But 60-minute games, you look at the work goalies get. Did he break a sweat or was he under siege?" Meanwhile, Lightning defenseman Ryan McDonagh is questionable for Game 2.

The Canucks will try to regroup after getting rolled 5-0 by the Golden Knights in Game 1. "I just don't think we played our best hockey. I don't think their team did a lot of things that surprised us structurally," said coach Travis Green. "We've gotta play a better hockey game, and I'm confident that we will." These two teams face just one potential back-to-back experience in this round, Games 5 and 6.

Question of the day: What will Ryan Reaves do for an encore?

Peter DeBoer knew that the Vegas Golden Knights were a "verbal" team before he joined them as head coach. "I was joking with Ryan Reaves that I was on the receiving end of that when I was in San Jose," he said. Reaves was in classic form in Game 1. Verbally, he taunted the Canucks and actually clucked like a chicken at Vancouver's Antoine Roussel. Physically, he threw his body around at several Canucks players. "When he's in the lineup, it lets your team play with more freedom," DeBoer said. Green was unmoved by the antics of either Roussel or Reaves: "I don't think it was a factor one way or the other." Still, what will Reaves have in store for Game 2?

Canucks and Golden Knights over 5.5 goals (-125). The Canucks now understand the speed, tenacity and disruption from the Golden Knights in the playoffs. They won Game 2 in both of their previous series. We're not saying they do the same here, but we do believe their offense will get going a bit more in Game 2, at least enough to clear the 5.5 goals with some help from Vegas' scorers.

Nothing is getting by Semyon Varlamov these days. The Islanders goalie pitched his second consecutive shutout, making 29 saves to give New York a 1-0 series lead. Andy Greene, Jean-Gabriel Pageau, Anders Lee and Devon Toews scored for the Islanders. Sean Couturier, Claude Giroux and Travis Konecny have all yet to score a goal in the postseason for the Flyers. "Our top end are good players. The willingness is there. The execution was just a little off tonight," Flyers coach Alain Vigneault said. Full recap.

The Stars are suddenly an offensive juggernaut. Dallas has scored 17 goals in its past three games, taking a 2-0 series lead on Colorado with a five-goal rally in Game 2. "The one thing we're always talking about on the bench is momentum," Dallas coach Rick Bowness said. "If we score a goal, we want to go right back at them. We want to attack." Down 2-0 in the second period after two Colorado power-play goals, the Stars got power-play goals of their own from Joe Pavelski (his seventh of the postseason) and Radek Faksa. Alexander Radulov had a puck bounce off his body and into the net for the lead. And then Esa Lindell scored on a rebound chance that held up after a video review. The rally wouldn't have happened without goalie Anton Khudobin, who made 38 saves. Colorado, missing three players to injury, was left searching for answers. "Our resolve just wasn't where it needed to be after a bad break or a bad penalty. At this time of year, we have to expect more from each other," coach Jared Bednar said. Full recap.

With two shutouts in a row, Varlamov now has a scoreless streak of 136:20, which is just 39 seconds away from Hall of Famer Billy Smith's franchise playoff record set in 1980.


In Game 2, the Stars forward was good, in setting up Joe Pavelski's power-play goal to cut the Colorado lead to 2-1; and he was lucky, as a puck went off his shoulder and into the goal for the tiebreaking goal at 3-2.

"If you could see the inside of my lip after the last week or so, I've been biting it so many times. It is hard. They're witty guys." -- Vegas coach Peter DeBoer on the chatter from the Golden Knights' bench during games and keeping a straight face.

Charlie McAvoy knows that if you're going to give Zdeno Chara effusive praise as a mentor, you'd better blow him a kiss afterward.

The Avalanche were baffled as to why referee Dan O'Rourke signaled the fourth Dallas goal despite not having a clear view of the puck crossing the goal line. Captain Gabriel Landeskog argued that the referee was ruling on Esa Lindell's celebration rather than the shot.

"I mean, Dan [O'Rourke] is behind the net on the other side. I don't know how he sees that the puck is across the line. I don't know how he points at the net. I think he realized pretty quickly that he messes up. Once he starts watching the video replay, I think he realizes that he went off of Esa Lindell's reaction and pointed to the net. You can't overturn it if there's no evidence," Landeskog said. "We haven't gotten an explanation. I'm excited to see what the explanation will be."

The referees reviewed the play and the call on the ice stood. 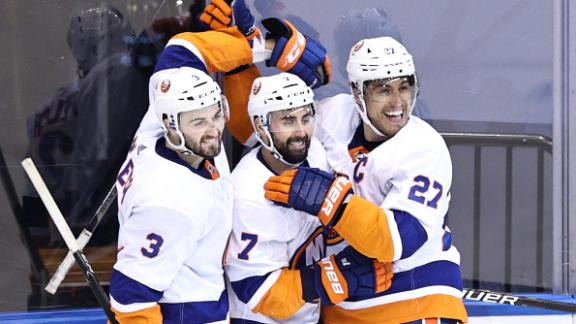 Lee pads Islanders' lead with third-period goal
Anders Lee scores his fourth goal of the postseason, and the Islanders go on to defeat the Flyers 4-0 in Game 1. 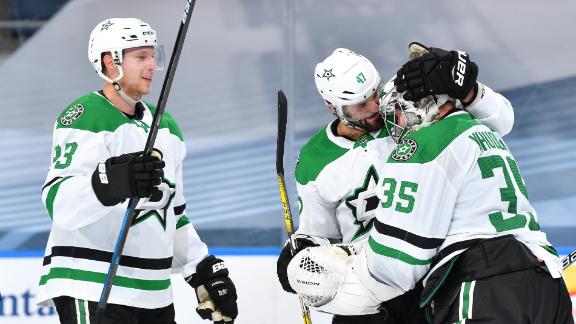