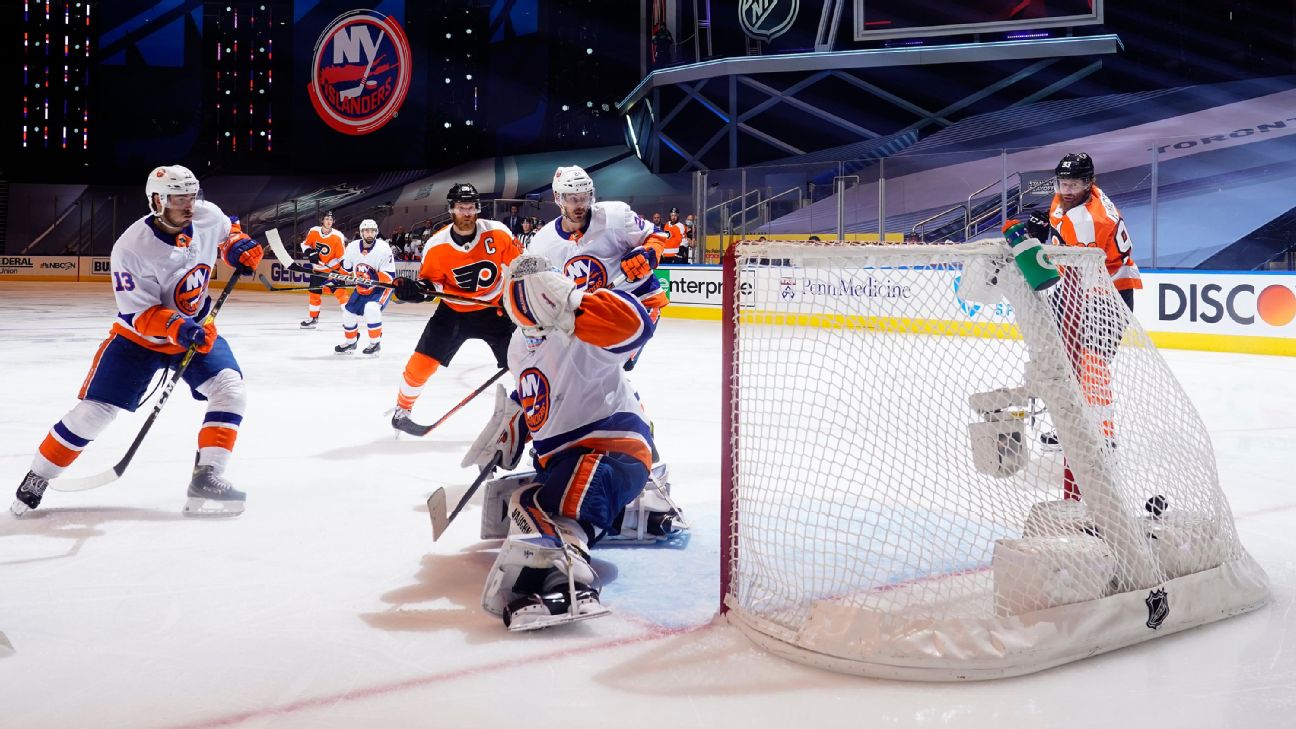 The NHL paused its schedule the past two days in solidarity with other sports leagues, protesting racial injustices as well as the recent police shooting of Jacob Blake in Wisconsin.

"I've got so much more respect for every single player in this league for doing something like this," said Colorado Avalanche center Nazem Kadri, the only Hockey Diversity Alliance board member who is still playing in the postseason. "On systemic racism, we can use these next couple of days to further educate ourselves, for the betterment of society. It's something that needed to be done. Hockey's a team sport. Every single guy here is on the same page."


While game action resumes today with a tripleheader, this is a conversation that's not going away.

The Lightning are looking dangerous again, scoring on three of six power-play opportunities in Game 3 after going scoreless in their previous 16. And the Bruins? They were uncharacteristically flat, letting Tampa Bay crush them 7-1 on Wednesday take a 2-1 series lead. Bruce Cassidy said on Thursday morning the Bruins were "licking our wounds" but vowed to be better, though he's especially looking for more production from the middle of the lineup. It can't just be the Brad Marchand show -- though Marchand has been terrific throughout this tournament (seven goals, 12 points through 11 games).

Just when everyone started crowning the Islanders the best team in the bubble (guilty over here), the Flyers stormed back with a 4-3 overtime win in Game 2. It was a game they had to win, after blowing a 3-0 first-period lead. Isles goalie Semyon Varlamov entered Game 2 with a 136:20 shutout streak, having saved 182 of the 188 shots at 5-on-5 in the playoffs (good for a .968 save percentage). He was pulled after allowing three goals, all at even strength. With the extended time off between games, it wouldn't be a surprise to see Barry Trotz turn back to Varlamov, not Thomas Greiss, in Game 3.

Game 1 of this series was chippy, and Vegas looked to assert its dominance over the upstart Canucks with a 5-0 win with a commanding 64.3% Corsi for percentage. In Game 2, Vancouver flipped the script, winning 5-2 as its young stars put on a show (especially Elias Pettersson, with this silky smooth goal). This weekend marks an important swing in the series with Games 3 and 4 being held back-to-back on Saturday and Sunday, all but ensuring you'll see Marc-Andre Fleury in net for one of those games. I recommend this story by Greg Wyshynski about the Vegas goaltending dynamic.

Question of the day: How will the NHL continue conversations about race for the rest of the tournament?

Postponing games on Thursday and Friday was a monumental step for the NHL. We all know hockey is a predominantly white sport. To see the players stand in solidarity with the Black Lives Matter movement showed not only tremendous allyship, but compassion.


"Most of these guys have never lived through some of this stuff that Black athletes have," Golden Knights forward Ryan Reaves said on Thursday. "They don't go through those day-to-day things where they've seen racism, or their families have gone through it. But for them to say that they see what's going on in society and we disagree with it and something has to change right now ... standing together, here, is more powerful than anything you can do."

But there's a mantra players keep repeating: This is a movement, not a moment. So how will the NHL maintain the momentum to ensure going gameless for two days wasn't just performative?

Will we see more in-game elements promoting the message, similar to what we saw in the beginning of the tournament (which quickly faded away)? Will players use their platform in news conferences to share what they've learned about racial and social injustices? Will we see the NHL step up to announce its own initiatives? One thing I'd personally like to see: a commitment to diversifying hiring practices, and perhaps that begins with the creation of internships or fellowships. Representation matters. We need to keep diversifying the voices in this league.

Postponing games for two days was indeed a monumental step, but it was also just that: a step. How can we keep moving forward?

I've never seen solidarity among NHL players quite like this. I keep juxtaposing it to the image of Matt Dumba being the only player to kneel during the national anthem, with everyone else standing around him. As a player in the bubble texted me: "Guys are starting to get it. We can't leave anyone alone on an island."