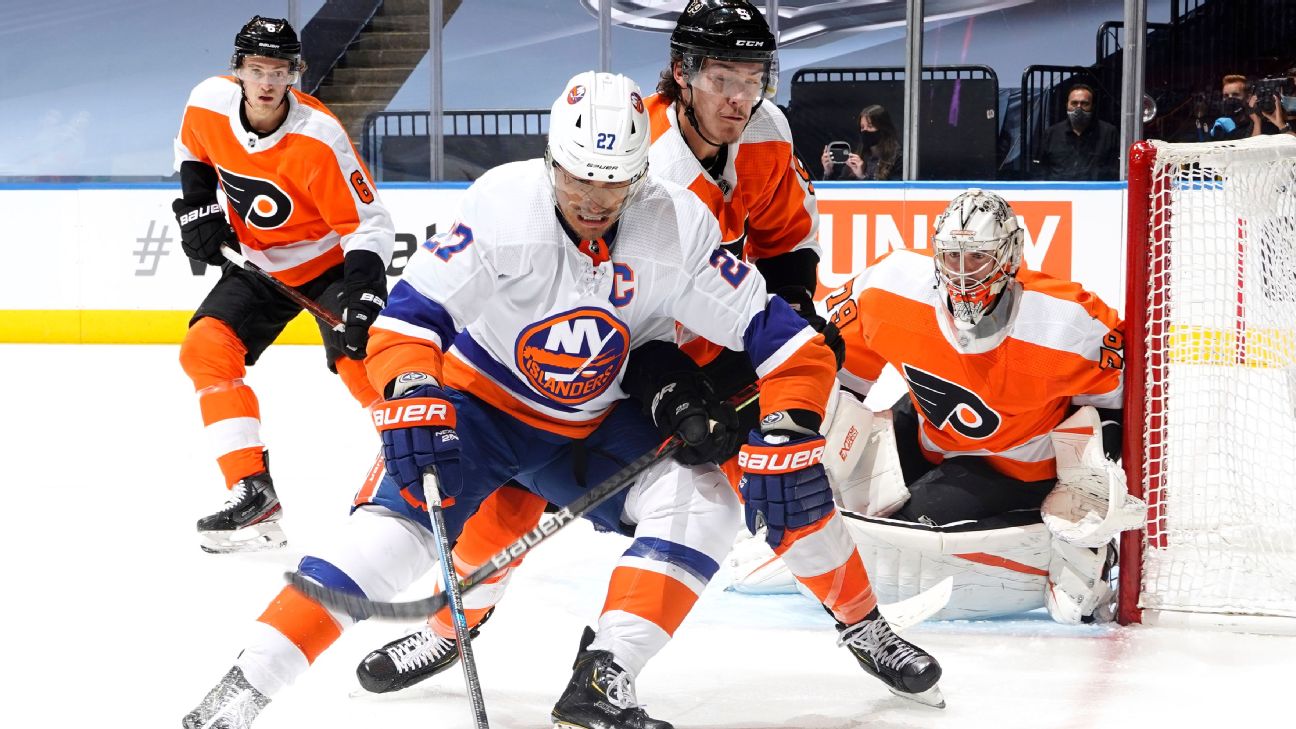 Tuesday night in the 2020 NHL playoffs included a doubleheader that brought the heat -- including two of the nicest goals we've seen in the playoffs yet.

And today, we get a triple threat: the return of afternoon hockey (yay!), the second of a back-to-back, plus a pivotal game for the Colorado Avalanche, the rock star team suddenly facing adversity.

Are the Islanders boring? Depends on your definition of the word. I'm a person who thinks elite defensive structure is pretty fun to watch. These guys are never out of position, and determined on every play. Plus, New York actually scores a lot of goals on the rush (second most in the postseason). They may just be the best team in the bubble this season. The Flyers, like most teams this summer, looked totally dumbfounded in their first game playing against the Isles. But Alain Vigneault thinks his team will settle in for the rest of the series. "I believe in them," Vigneault said. "They're good players, they've proven [so] all along. They get another opportunity to go at it to show that they are elite players in this league. I definitely expect them, and the whole group, to be better."

A huge decision looms for Bruce Cassidy: Does he start 35-year-old Jaroslav Halak (who had another busy night on Tuesday) in the second half of a back-to-back, or give 23-year-old Dan Vladar a start, in what would be his first NHL action? Cassidy says he's going to decide Wednesday morning. (Halak's take after Tuesday night's 36-save loss: "I feel fine. We just need a good night sleep.") As for the Lightning? They're no strangers to quick turnarounds in these playoffs, and Jon Cooper is feeling good about how his team responded in Game 2 with this, uh, colorful metaphor: "If you want to have any chance of winning and going deep in the playoffs, adversity strikes in the weirdest ways and you never know when it's going to happen. Sometimes you're dealt a, you know, a sandwich, and it doesn't taste very good if you know what I mean."

The Avalanche entered this round sizzling hot, finishing off the Arizona Coyotes by a combined score of 14-2 over the final two games. How quickly things can change in the bubble. It also looks like two important players -- goalie Philipp Grubauer and minutes-eating defenseman Erik Johnson -- could be done for the series. "We've got to move on and go without them for the foreseeable future," coach Jared Bednar said. The Stars, meanwhile, look unstoppable. They've won five straight, including three five-goal games, which is as many as they had in 69 regular-season games. "You don't always fight back in this league because it's too tough of a challenge," coach Rick Bowness said. "Lately, we've been able to do that and a lot of it has to do with resilience and the puck finally going in the net for us."

Tampa Bay got off to a much better start, despite falling behind 1-0 early, but this game was a showcase for the new players GM Julien BriseBois brought on this season because, as Jon Cooper said, they have "dirt under their nails." Zach Bogosian contributed a memorable end-to-end rush; Blake Coleman scored two goals -- including a gorgeous diving one, evoking images of Bobby Orr; Patrick Maroon and Kevin Shattenkirk both had assists. But it was old standby Ondrej Palat who won it in overtime. The Lightning are now 18-8 all time in playoff overtime games -- including 3-0 this summer -- the best record in NHL history. Brad Marchand (two goals) was once again sensational for Boston. Brandon Carlo had a rough night, including an ill-advised pass in overtime that caught his coach's attention. "We had the puck all alone and we rimmed it to nobody," Bruce Cassidy said. "We need to manage the puck better in those situations."Full recap.

After getting humbled in Game 1, the Canucks jumped out to a 2-0 lead in the first period. The Golden Knights retaliated with a wild second-period surge -- holding a 50-11 edge in shot attempts -- but they eventually tired themselves out. The story of this game was the 40 blocked shots the Canucks recorded, just one shy of the NHL playoff record for a regulation game. Elias Pettersson and Tyler Toffoli -- the latter of whom was playing for the first time in 10 games -- both had three points, and Jacob Markstrom looked strong with 38 saves. Captain Bo Horvat had two goals too. "We got exactly what I expected," Vegas coach Peter DeBoer said."We knew it was coming and for whatever reason we weren't ready for it, that's disappointing."Full recap.

With a goal and two assists, Pettersson now has six multipoint games this postseason, which is most in the NHL. The Swede trails only Nathan MacKinnon in the playoff scoring race (16, to MacKinnon's 18).


Yes, Palat may have scored the game winner, but Coleman had two huge goals for the Lightning, including this one, which may have been the prettiest of the playoffs so far.

Toffoli was in the lineup for the first time since Vancouver's Game 1 against Minnesota in the play-in series, and scored just nine seconds into his first shift. Toffoli ended the night with a goal and two assists; entering this game, he had two points (both assists) in his previous 15 postseason games.

Flex of the day

Zach Bogosian is known as a bruising defenseman. So when he split Torey Krug and Brandon Carlo to dish out a gorgeous assist on Blake Coleman's Bobby Orr-esque diving goal, it certainly turned heads. The only person not impressed was Bogosian himself:

Deke of the day

Vegas Golden Knights players were chirping Elias Pettersson, calling him "little squirt" in Game 1. Little squirt is not only out there breaking ankles ...

... but he's also killing the Knights with kindness

Meme of the day

We always love a good callback, and this doctored photo -- evoking the now-infamous tweeted picture from Marc-Andre Fleury's agent Allan Walsh -- is worth 1,000 words: 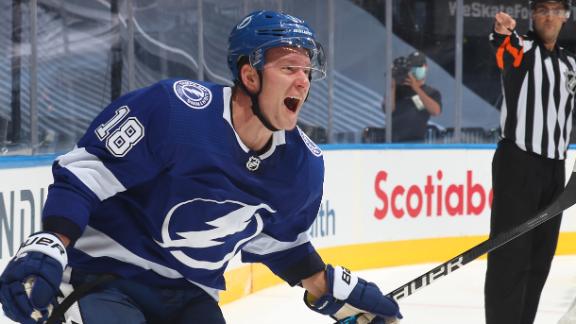 Palat's OT goal evens series for Lightning vs. Bruins
Ondrej Palat nets a goal off the missed wraparound attempt in overtime as the Lightning beat the Bruins 4-3 to tie the series. 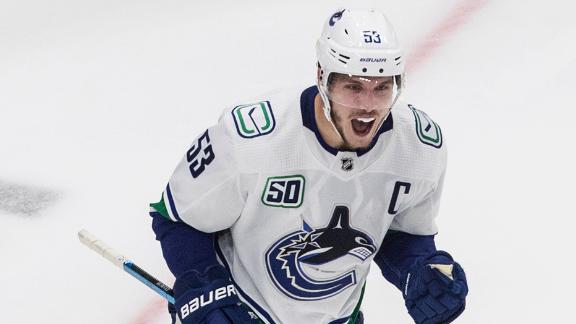