2021 NBA Playoffs: Everyone on Twitter knew Kevin Durant would get the ball, and then KD delivered

ESPN
By ESPN.com
The Milwaukee Bucks and the Brooklyn Nets have given fans a thrilling series to determine who will go to the Eastern Conference finals. With Giannis Antetokounmpo and Kevin Durant dueling to the end, the Bucks had a two-point lead with seconds remaining. With the game on the line, everyone assumed they knew who would get the ball.

Durant, as only he can, delivered.


Initially viewers at home thought Durant had made a go-ahead 3, but replay confirmed that the refs' got it right, and KD's jumper was worth 2. Nevertheless, the NBA's biggest names took to social media to show their appreciation for No. 7.

Durant, who would play all 53 minutes of regulation and overtime, would finish with 48 points. That tally would set a new NBA record for most points in a Game 7. Unfortunately for the Nets, KD's scoring outburst would not be enough as Milwaukee would edge Brooklyn 115-111 to earn a trip to the conference finals.


Even after the game, Durant's peers would shower him with praise of his performance. 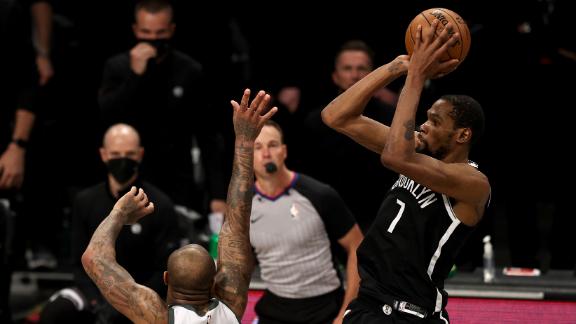