2022 WNBA schedule: The 10 must-see games of the regular season 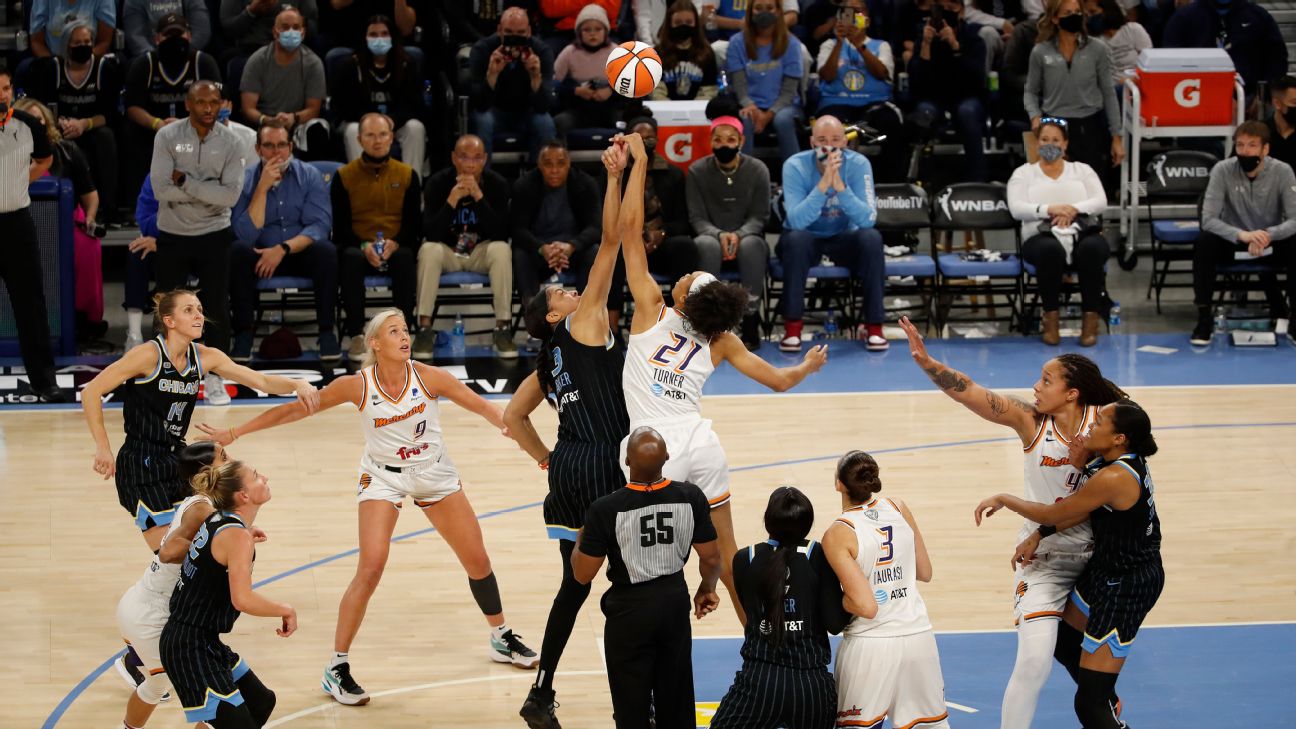 The 2022 WNBA schedule was released on Thursday. While there are still five months to the start of the 2022 season -- which tips off about a week earlier than last season so the schedule wraps up before the FIBA Women's Basketball World Cup in September in Australia -- we're eager to look ahead and project some of the more interesting games to watch.

A lot can happen between now and the season openers on May 6, 2022. We might get a couple of announcements about retirement, or "at least one more year" from certain players.There are currently two head-coaching vacancies: the New York Liberty and the Phoenix Mercury.


We know that free agency -- teams can start negotiating with eligible players on Jan. 15 and signing them on Feb. 1 -- will change the landscape, just like it did last season, when Candace Parker moved from the Los Angeles Sparks to the Chicago Sky, and then went on to win the 2021 WNBA title with her hometown team.

There will undoubtedly be trades. April's draft is expected to bring more players who can make an immediate impact than the 2021 draft did.

That said, let's glance ahead to what's on tap for the league's 26th season. These are 10 games to keep an eye on.

Parker will turn 37 in April, but has shown no signs of slowing down after winning her second WNBA championship last season. The opening game of 2022 pits her against her former Sparks teammates. Los Angeles meanwhile will be eager to prove that last season's rare playoff miss was truly an aberration.

While everyone wonders if Bird, 41, and Taurasi, 39, will continue their Hall of Fame careers for at least one more year, we have to wait and see. The Mercury will also be under the direction of a new coach, as Sandy Brondello is out after eight seasons.


The rivalry between these two franchises is one of the WNBA's best, even if we're about to be five years past their last WNBA Finals showdown. After an injury-plagued 2020 season, Lynx center Sylvia Fowles returned strong in 2021 and won the WNBA's Defensive Player of the Year award for the fourth time.

Yes, we'll have our eyes on the Mercury a lot early on, including this rematch of the 2021 WNBA Finals. The Mercury left the Windy City very disappointed in October after the Game 4 loss that clinched the title for the Sky.

June 10, 7 p.m. ET:
Speaking of disappointments: The Sun felt the same way after losing as the No. 1 seed to Chicago in the semifinals. Connecticut is still seeking its first WNBA title, and maybe the fact that the Sky just got their first can serve as some inspiration.

June 24, 7:30 p.m. ET
New York made the 2021 playoffs, while the Dream dealt with a difficult season that included star Chennedy Carter being suspended for most of it. Both teams will also have new coaches in the 2022 season. Former WNBA player Tanisha Wright takes over the Dream. And we await news of the replacement for Walt Hopkins, who parted ways with the Liberty after two seasons. How will they look in 2022?


July 3, 7 p.m. ET
The Aces and star A'ja Wilson were crushed in their semifinals loss to Phoenix last season. Las Vegas will be eager to prove itself a championship contender again, as will the Lynx. Minnesota standout Napheesa Collier is pregnant with a May due date, so we'll see if she returns to action in 2022.

This will be a matinee at Capital One Arena in Washington, D.C., the Mystics' former home before they moved to the Entertainment & Sports Arena. Will Washington have Elena Delle Donne -- who missed the 2020 season and all but three games in 2021 because of back issues -- return to the roster? Will New York have Asia Durr, who missed both seasons after suffering long-haul COVID-19 effects?

Hold on, you say. Why would these teams, who finished 11th and 12th last season, be a "must-watch" match-up in August? To which the answer is: Hey, it's December, let's be optimistic. And we're excited about the possibility of the No. 1 and No. 2 draft picks perhaps goingto the Fever and Dream, and battling for Rookie of the Year honors.

The Wings made the 2021 playoffs, falling to the eventual champion Sky, and Dallas guard Arike Ogunbowale continues to be one of the league's most exciting players to watch. But will the Wings have a fully heathy Satou Sabally all season? Are they ready to take that next step to being a true contender? And will Phoenix be looking at another chance at a strong playoff run?
Report a correction or typo
Related topics:
sportsespnchicago skywnbanew york libertydallas wingsseattle stormlas vegas acesatlanta dreamindiana feverconnecticut sunwnba draftlos angeles sparksminnesota lynxphoenix mercurydailywashington mystics
Copyright © 2022 ESPN Internet Ventures. All rights reserved.
TOP STORIES
Police release photos of suspected gunman in Q train fatal shooting
3 women killed by drunk driver after leaving Sweet 16 party
Boy Scout suffers minor injuries in bear attack at NY campsite
Nurses, techs at NJ hospital stage strike over working conditions
15 arrested after NJ pop-up party that sparked 9 p.m. curfew
Man charged in 'execution-style' murder under Major Deegan Expressway
'American Idol' winner talks plans for the future
Show More
Teen who drowned in NJ reservoir identified
AccuWeather: Sun and clouds, breezy and cooler
Taxi drivers rally for raises, per trip increase for customers in NYC
Weekend storms in NY down trees, leave more than 1,000 in the dark
'I fought': Trevor Reed describes his survival in a Russian prison
More TOP STORIES News