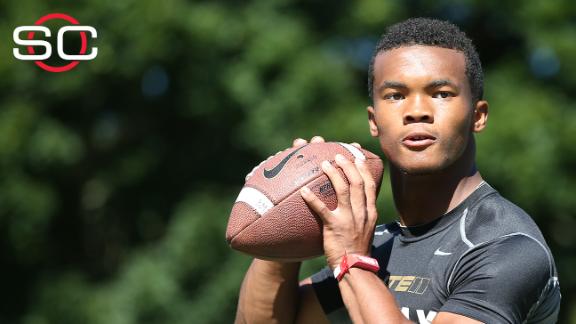 The suspense surrounding the future of the nation's No. 1 quarterback in the 2015 recruiting class ended Wednesday with a single tweet.

ESPN 300 quarterback Kyler Murray, the No. 1-ranked dual-threat quarterback in 2015, announced via Twitter that he will bypass the upcoming Major League Baseball draft and head to Texas A&M, the school he signed with in February, to play football and baseball.

Murray, a five-star quarterback who was the No. 13 overall player in the country, was a well-regarded baseball prospect and was projected to go as high as the first round of the draft.

The Allen (Texas) High School product will head to College Station this summer and begin working out with the Aggies in preparation for the 2015 season. He'll have the opportunity to compete for the starting quarterback job with Texas A&M's incumbent starter, Kyle Allen, who started the final five games of the 2014 season and won MVP honors in the Aggies' AutoZone Liberty Bowl victory over West Virginia.

Texas A&M offensive coordinator Jake Spavital made it clear multiple times this offseason that Murray will get a fair chance to compete for the job, even though he'll be a true freshman.

"The opportunity to come in and compete is still wide-open," Spavital told ESPN.com in February. "I always give that incoming freshman an opportunity."

Murray finished his high school career as one of the most decorated quarterbacks in Texas high school football's rich history, finishing 42-0 as a starting quarterback and leading Allen to three consecutive state championships at the state's highest classification. He was the 2014 Gatorade National High School Football Player of the Year and earned numerous other accolades during his career.

ESPN MLB Insider Keith Law ranked Murray as the 32nd-best prospect in this year's baseball draft and according to Law, he had top-10 overall talent based on his athletic ability.

The 5-foot-11 Murray threw for 4,713 yards and 54 touchdowns while rushing for 1,485 yards and 25 touchdowns in his senior season at Allen, leading the Eagles to a 16-0 record. This is the second straight year that the Aggies have signed a quarterback ranked No. 1 in his recruiting class.