A house divided: One roots for the Mets, the other for the Cubs 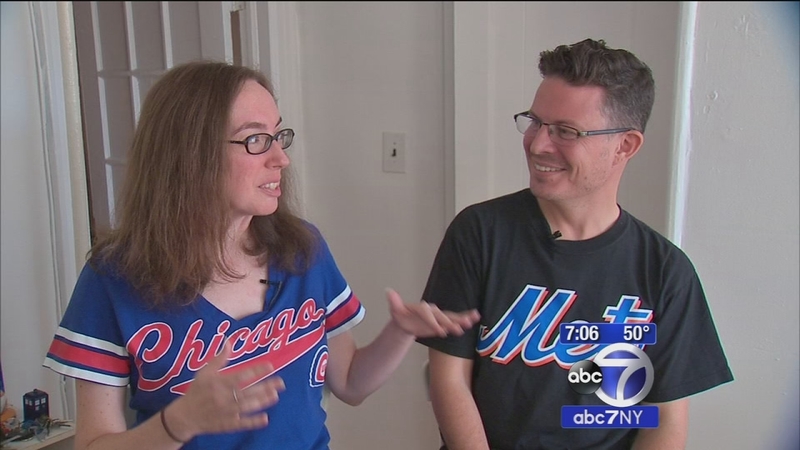 NEW YORK (WABC) -- One couple in Brooklyn will be cheering their team on during the National League Championship Series. But it may come as a surprise that only one of them will be cheering for the Mets.

"I don't sit during the games, I'm kind of a nervous watcher," said Brad Reichel.

"I sat in sports bar by myself, just like watching it and it was very exciting," said Jannette Pinson.

The two share a passion for baseball. But when it comes to their allegiances, it is a house divided.

"If the Cubs beat the Mets she's not going to let me live it down for quite a bit," said Brad.

And these two are true fans.

She high fives random Cubs fans on the street, and forced him to wear a Cubs shirt at Wrigley Field last year.

But their relationship now is about to be tested in a way they never saw coming.

After all Mets fans and Cubs fans do share some common ground.

Both have suffered through long droughts so the odds of them facing off in a National League Championship Series, they thought, was slim.

"Who has the worst losing record, that's kind of what you can take away from it. We may be bad but we're definitely not as bad as the Cubs," said Brad.

In fact, when they first met, she worried what her dad would think.

Also a Cubs fan, her father is still fuming over the 1969 season, when Chicago blew a 9 game lead to the Mets, considered one of the most infamous pennant collapses in history.

"I was really concerned at first that my father wasn't going to like him at all because once I found out he's a Mets fan I'm like Oh God this is bad," said Jannette.

So she says if the Cubs win, he may have to do dishes, for who knows how long.

He says if the Mets win, her father will never let him live it down.

And by the way, these two can't even agree on where they live.