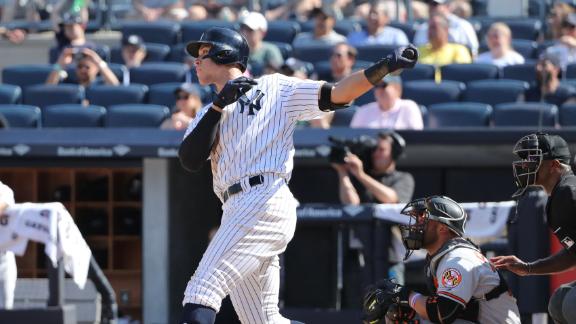 Judge's homer, his 20th of the season, was hit to left center in the sixth inning.

The rookie sensation with the shirt referencing a character from the movie "The Sandlot'' didn't sound too impressed following the Yankees' 14-3 victory. His sentiment was unlike his teammates' and that of a sellout crowd of 46,348, who were awed by Judge's latest achievements.

"If I know it's going over the fence, I am going to start jogging and just get around the bases and get back in the dugout,'' he said.

Judge hit his 21st homer in the seventh, a line drive to right center.

"He hit a line drive to right field. It was just a line drive,'' Yankees manager Joe Girardi said. "Most guys, they're hoping it gets in the gap. It just went out. I mean his power is incredible.''

He is the first Yankees player age 25 or younger to hit 20 home runs before the All-Star break since Roger Maris in 1960.

Giancarlo Stanton and Wladimir Balentien are the only players to hit a home run that traveled 490 or more feet since 2009.

Judge finished 4-for-4 in the Yankees' victory. He leads the American League in home runs, RBIs (47) and batting average (.344).

It's the week of Aaron Judge
In the past eight days, Aaron Judge has impressed with a batting-practice homer that made stadium bartenders scurry and a record-breaking 496-foot long ball. Check out some of his best moments this week.