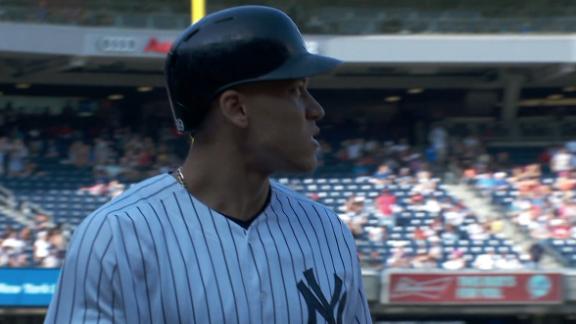 NEW YORK -- Dropped from the starting lineup for two games in order to refresh, Aaron Judge returned as a pinch hitter in the ninth inning of the New York Yankees' Game 1 doubleheader loss to Cleveland on Wednesday.

Ahead 3-1 in the count against closer Cody Allen, Judge swung and missed on a low curve, then struck out on a fastball, ending the Yankees' 2-1 defeat in the opener. He went 1-for-3 with an infield single, a walk and a strikeout in the second game, a 9-4 loss.

"I'm glad to be back out there and felt good in the box. I felt like I was swinging at the right pitches," Judge said.

Still, he didn't make good contact against Allen, especially on the breaking ball.

"Tough to stay off of that," Judge said.

Judge was held out of Monday's series opener against 2014 AL Cy Young Award winner Corey Kluber and was out of the lineup Tuesday before the game was rained out. Manager Joe Girardi indicated Monday that the Judge would receive a few days off "to try to refresh him and get him going."

"I'm the player and he's the coach," Judge said. "He tells me when I'm playing and when I'm not playing. He said he's giving me a couple days off and that was it."

Judge leads the American League with 37 home runs but has tailed off dramatically since winning the Home Run Derby during the All-Star break. The big rookie is batting .181 with seven homers and 16 RBIs in the second half, dropping his overall average 49 points to .280.

"This is going to just refresh the body," he said before the doubleheader. "Get a little refresher here for the last push. We've got a lot of important games coming up."

Judge entered in a 2-for-18 slide. He has been dealing with a troublesome left shoulder for which he continues to receive treatment. While an MRI exam has not yet been scheduled, and a cortisone shot has been discussed, the right fielder noted that the time off, along with ice, compression and elevation, has been helpful.

"You can go around this whole clubhouse and we're all kind of beat up," he said. "We've been playing every day since April, so, yeah, getting a day off doesn't hurt."

"That is not the mechanical issue," he said.