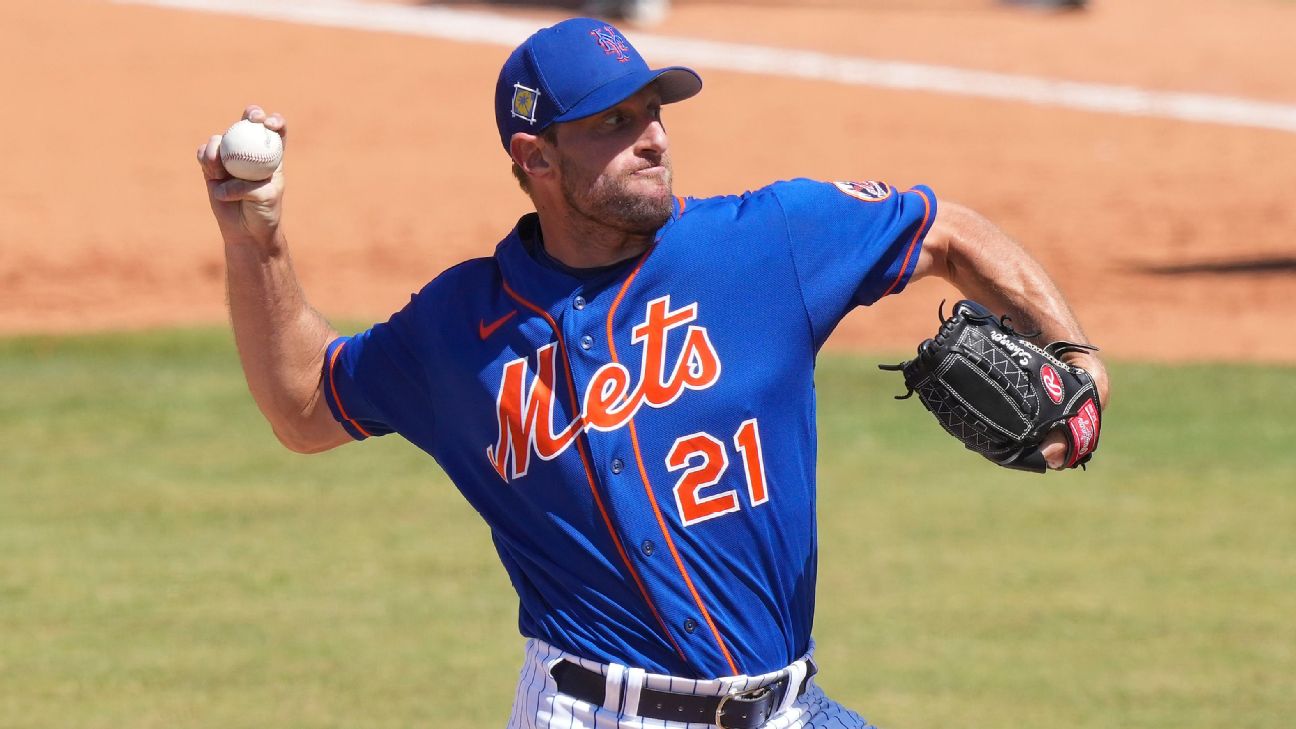 WASHINGTON -- Max Scherzer declared himself "good to go" for his New York Mets debut in Friday's second game of the season against the Washington Nationals, the club he helped win the 2019 World Series.

The three-time Cy Young Award winner developed a problem with his right hamstring late in spring training camp in Florida and there had been some uncertainty about when he would be able to make his first appearance of the regular season.


With fellow Mets right-hander Jacob deGrom, twice a Cy Young honoree himself, sidelined for at least a month or two because of a shoulder blade issue, New York's vaunted rotation appeared to be headed for a slow start under new manager Buck Showalter.

But Scherzer said he came through some fielding work just fine at Nationals Park before Thursday's game on opening day.

"I knew it was a hiccup. I knew it wasn't a major, like, injury. I've done this a couple times and had an idea what it was," Scherzer said, speaking to reporters in front of a locker in the visiting team's clubhouse at the stadium he called home for 6 1/2 seasons until getting sent to the Los Angeles Dodgers at the trade deadline in late July.

Scherzer became a free agent and signed a three-year, $130 million contract with the Mets, part of a big-spending offseason for owner Steve Cohen.

During his time in Washington after getting a seven-year, $210 million deal before the 2015 season, Scherzer won a pair of NL Cy Young Awards (his other came in 2013 in the AL with Detroit), tossed two no-hitters and had a 20-strikeout game, in addition to helping win a championship two years ago.

Loud applause greeted Scherzer when he came out of the dugout for pregame introductions before Game 1 on Thursday night. A video tribute was shown on the outfield scoreboard, featuring clips from the news conference when he signed with the Nationals and game highlights. It closed with the message "Thank you, Max" and an image of the World Series trophy.


Asked what he expects his return to the mound in the nation's capital to be like on Friday, Scherzer said: "It's just going to be a crazy, wild atmosphere."

"It's going to be fun. He's going to try to strike me out. And I will try my best to not strike out, because I know he wants that, really bad," said Washington right fielder Juan Soto, the 2021 NL MVP runner-up.

"Him leaving last year was tough, for me, especially. I hadn't been in the big leagues without him by my side," Fedde said. "So it'll definitely be weird. It's not going to be fun, knowing the kind of player and competitor he is. But it's one of those things where you step on the field and he's on the other side, so hopefully we beat him up."
Report a correction or typo
Related topics:
sportsespnnewsmlbmax scherzernew york mets
Copyright © 2022 ESPN Internet Ventures. All rights reserved.
TOP STORIES
Witness: Trump grabbed steering wheel, wanting to go to Capitol | LIVE
Mayor: Giuliani should be investigated for falsely reporting crime
Epstein associate Ghislaine Maxwell sentenced to 20 years in prison
15 adults, teens treated for carbon monoxide exposure on Long Island
Grandmother of Uvalde school shooter released from hospital
Serial burglar targets NYC businesses after hours
Nazi convicted: Former SS guard, 101, jailed for aiding murder
Show More
50 migrants die after 18-wheeler abandoned in Texas heat
Former NJ home of Justice Alito targeted with harassing packages
AccuWeather: Picture perfect
Boy Scouts jump into action after Missouri Amtrak train derailment
Elderly bystander grazed in abdomen by stray bullet in Connecticut
More TOP STORIES News