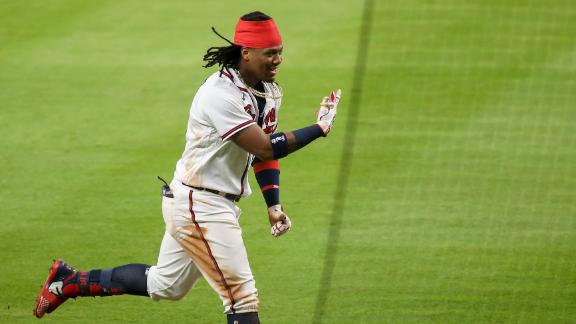 ATLANTA -- Ronald Acuna Jr. shook off a slow start by driving in two runs with two hits, including his first homer, and the Atlanta Braves beat Michael Wacha and the New York Mets 7-1 on Saturday night for their fourth straight win.

The Mets have lost four straight, including the first two games of the four-game series between the NL East rivals.


Marcell Ozuna hit a two-run homer, his third, off Wacha (1-1) in the first inning.

Acuna led off the game with his 18th strikeout, the most in the majors, before emerging from his funk. He doubled in a run in the second for his first RBI as the Braves stretched the lead to 5-0.

Acuna lined his first homer into the left-field seats in the sixth off right-hander Franklyn Kilome, who gave up two runs in his major league debut.

Following the homer and fake high fives with teammates in the dugout, he emerged for a curtain call, raising both arms to the fan cardboard cutouts in the stands.

"You want to keep as many traditions as possible even though the fans aren't here," Acuna said through a translator. "You want to ... try to make it as much fun as possible."

"He's always out there looking for that," Rojas said of Acuna, adding the homer provided "some quick learning experiences" for Kilome.

Acuna hit 41 homers and had 37 stolen bases in 2019. He struggled during the first eight games, but manager Brian Snitker said he saw signs a breakout was coming.

"I could feel it the last few days, here and there there were signs," Snitker said. "He's been working hard, I know that. He's been here early every day."


Toussaint moved into the rotation spot left vacant when Mike Foltynewicz was designated for assignment on Tuesday and sent outright to the team's alternate training site on Thursday.

Toussaint may have earned another start. He was forced to pitch out of trouble in the third, when he walked two batters. He again escaped a bases-loaded jam in the fourth, when he gave up singles to Michael Conforto and Robinson Cano before walking Dominic Smith.

Toussaint struck out Wilson Ramos before ending the fourth on Amed Rosario's groundout to third base.

The Mets finally scored in the fifth off Luke Jackson. Cano's bases-loaded sacrifice fly to right field drove in Brandon Nimmo, who walked.

Kilome was recalled on Friday, when catcher Rene Rivera was placed on the injured list.

Snitker said RHP Jhoulys Chacin was designated for assignment before the game because the team needed a fresh arm in the bullpen. The Braves selected the contract of LHP Chris Rusin. Chacin, who signed a one-year deal on July 21, allowed four runs in 1 1/3 innings on Friday night.

"Right from the start I felt like I was a little bit sloppy with mechanics, with execution, with intent on pitches," Wacha said. "It's just got to be a lot more I guess on point with everything than I showed today."

Braves: 2B Ozzie Albies (stiffness in his right wrist) returned to the lineup. He appeared to aggravate the sore wrist after being used off the bench on Friday night. Instead, Snitker said Albies gave the team a scare when he lost his breath momentarily when he hit the ground on a play at second base.

After earning a win in his major league debut on Friday at Boston, LHP David Peterson will face the Braves in his first National League start on Saturday. Peterson allowed two runs in 5 2/3 innings in the 8-3 win over the Red Sox. RHP Kyle Wright will start for the Braves.