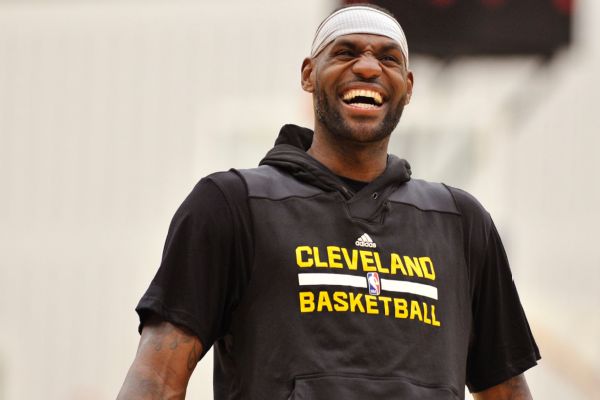 TORONTO -- LeBron James has played in the NBA Finals seven times and the Olympics three times, racking up experiences as a competitor like few ever have. Now he wants to round out his resume as a spectator.

James attended the Cleveland Indians 5-1 loss to the Chicago Cubs in Game 2 of the World Series this week and called it a bucket list night.

What other sporting events would James like to see in person before his time is done?

"I've been in the playoffs for 12 straight years, so the Kentucky Derby doesn't allow me as far as that," James said before Cleveland Cavaliers shootaround Friday.

The 2016 Kentucky Derby was run May 7 while James and the Cavs were in Atlanta preparing to play Game 4 of the Eastern Conference semifinals the next day, for instance.

James also put trekking to Monaco to witness the F1 Grand Prix near the top of his to-do list.

It's not like he hasn't collected coveted ticket stubs already, though. He flew to Arlington, Texas, for Ohio State's 42-20 win over Oregon in the 2015 College Football Playoff championship at AT&T Stadium. He's been to home football games for both the Buckeyes at Ohio Stadium and the Ducks at Autzen Stadium, to boot.

James' issue has been finding the time. For Ohio State's national championship, James just so happened to have a road game in Phoenix the next day so he was able to make the relatively short flight from Arizona to Texas and back.

During the NBA lockout in 2011 he had plenty of free time, of course, and used it to attend an Alabama-LSU football game in Tuscaloosa as well as a Premier League match between Liverpool and Manchester United in England.

With the NBA season stretching from early October until late June (at least for James, with his six-year streak of reaching the Finals intact), the rest of his wish list will have to wait.

"After I retire," James said. "Those are some of my (goals): couple football stadiums, college football stadiums I'd like to go to ... It has nothing to do about money and accessibility, it's about my schedule."

While James' list is certainly ambitious, it has its limitations. For one, you won't see him tying a red bandana around his neck in Pamplona, Spain.

"You're talking about (Dwyane) Wade?" James shot back when asked if he wanted to run with the bulls, connecting the question to the Chicago Bulls. "I was about to say, don't start that, man. No, I'm not running with no damn bulls. I'm not."
Related topics:
sportsespneastern conf all starscleveland cavalierschicago bullsdwyane wadenbalebron james
Copyright © 2021 ESPN Internet Ventures. All rights reserved.
More Videos
From CNN Newsource affiliates
TOP STORIES