Alex Rodriguez on PED suspension: 'How stupid can you be?' 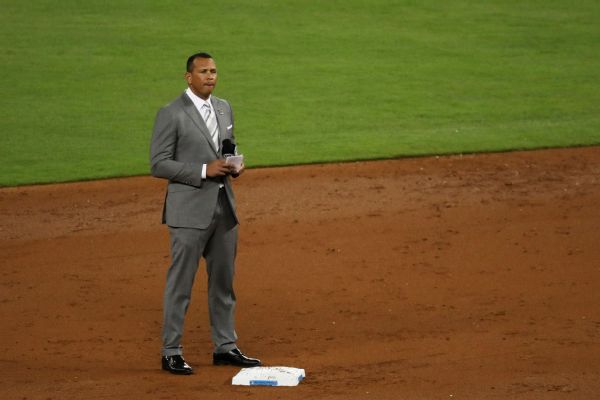 Alex Rodriguez said his admitted use of steroids during his 22-year career cost him millions of dollars and a potential spot in the Baseball Hall of Fame. Butchronic pain in his hip and the desire to put up big numbers drove Rodriguez to take performance-enhancing drugs.

"There's so many frustrating things when you look back at that," Rodriguez told Joe Buck in an excerpt from the Audience Network show "Undeniable," which will air Oct. 18. "Number one, you have a guaranteed contract for hundreds of millions of dollars. Literally, you can sit on the couch and get fat. Right? How stupid can you be? ... This thing cost me over $40 million. And it cost me my reputation, and it may have cost me the Hall of Fame and a number of other things."

Rodriguez said he would spend restless nights thinking about how he put himself in the situation that saw him be suspended for the entire 2014 season.

"I remember sitting there at night at maybe 4 or 5 o'clock in the morning -- I probably did this a hundred nights -- and I would look up with tears and say, 'How the 'F' did I get myself in this position?' I'm the only jackass that has pocket aces and figures out a way to lose the hand."

Rodriguez, now an analyst with Fox Sports, says he makes no excuses for his suspension.

"The hardest thing I had to do, I had to admit to [daughters] Natasha and Ella the mistake that I made. ... And I needed [ex-wife Cynthia Scurtis] to be part of that. I told Cynthia, 'When I sit down with the girls, they're gonna be listening to me, but they're gonna be looking at you, and chances are I'm not gonna make it past first base because I'm gonna probably start breaking down.' And sure enough, I almost didn't get out of home plate," Rodriguez said.