Alexandar Georgiev to make NHL debut for Rangers versus Canadiens 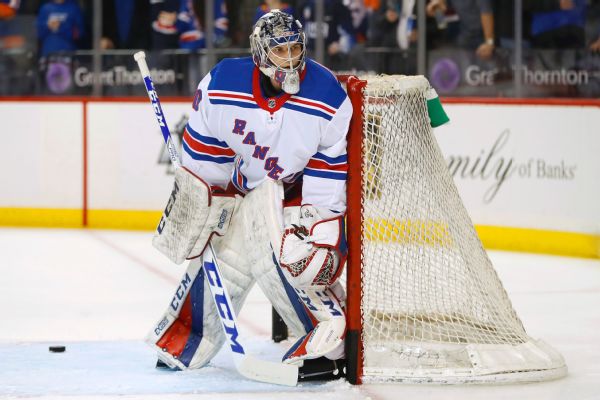 GREENBURGH, N.Y. -- Alexandar Georgiev is set to make his NHL debut for the New York Rangers when they visit the Montreal Canadiens on Thursday night.

"Everything I hear about that young man is positive," Rangers coach Alain Vigneault said Wednesday at the team's practice facility in suburban New York. "I hope our team in front of him is going to play real hard. We got to come out with energy."

Starting goalie Henrik Lundqvist has appeared in 27 of the Rangers' past 30 games -- twice when he came off the bench to replace backup Ondrej Pavelec, who is currently injured. The Rangers have lost 11 of their past 14 tilts, and Lundqvist has given up 18 goals on 128 shots during their current four-game skid. That includes a 7-4 loss to Philadelphia on Sunday.

"That first period we came out with energy, we were ready to play," Vigneault said. "Obviously, toward the end, there wasn't much left in the tank. We've had a full week to regroup here, and I want us to play a good game in front of a guy that's going to play his first game in goal for us."

Georgiev's chance comes in the front end of a back-to-back, as the Rangers return home to host Minnesota on Friday night.

After dealing with injuries to several players, the Rangers are starting to get healthier. Veteran defenseman Marc Staal, out since Feb. 3 with a strained neck, will return against the Canadiens and be paired withAnthony DeAngelo. Vigneault said forward Chris Kreider (blood clot) also is close to returning, but he will not make the trip to Montreal. The coach said defensemen Kevin Shattenkirk (knee),Ryan McDonagh (upper body) and Pavelec have all started skating as they work their way back and also will remain in New York.

Defenseman Rob O'Gara, acquired from Boston on Tuesday in the deal that sent Nick Holden to the Bruins, will make his Rangers debut against the Canadiens. The 24-year-old will be paired with fellow rookieJohn Gilmour.

The deal was the first of what could be several made with Monday's trade deadline approaching. It came about two weeks after general manager Jeff Gorton announced the Rangers' moves at the deadline would be with an eye to the future and "not trying to save this season."

Vigneault acknowledged the announcement has made things "a little awkward," but he added that players and coaches "all got to focus and we all got to be pros."