All you need to know about Yankees' toughest stretch of 2018 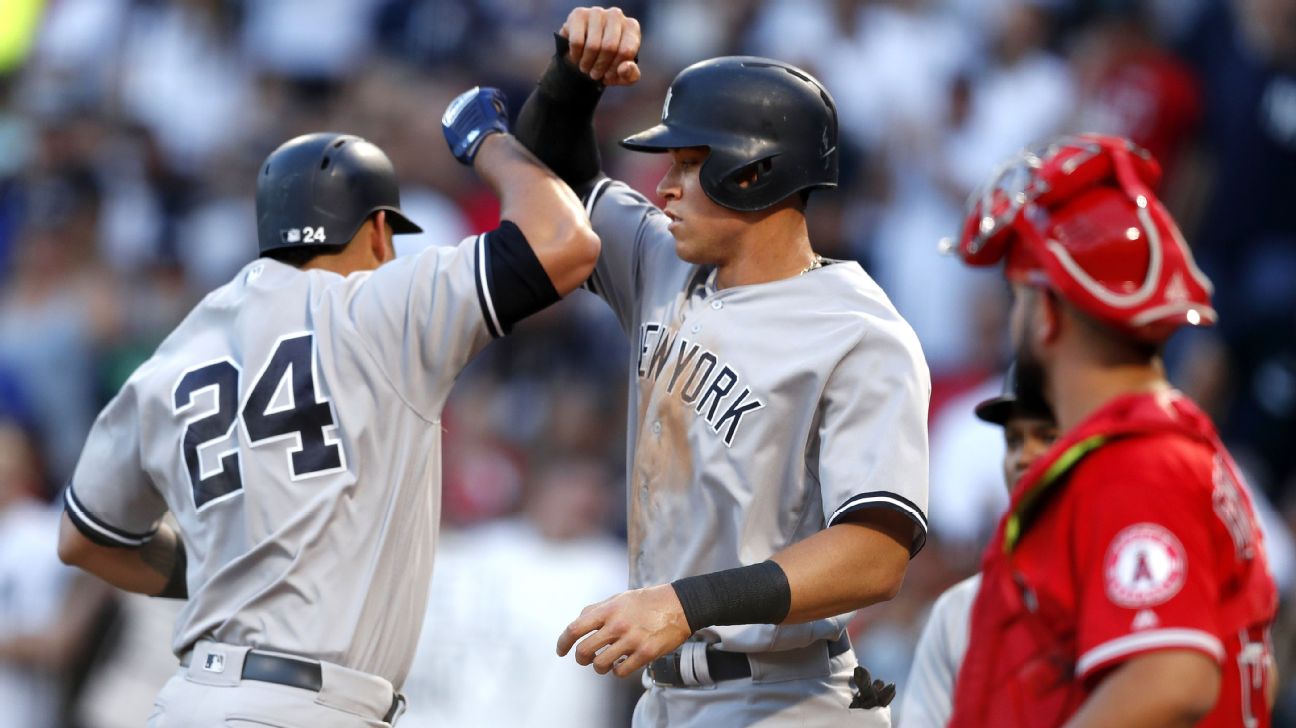 The final weekend in April and the beginning of May will feel a whole lot like October for the New York Yankees.

The Bronx Bombers kick off a 13-game stretch Friday night in Anaheim that will see them play the four teams -- the Angels and Astros on the road, followed by the Indians and Red Sox at home -- they're most likely to meet in the playoffs ... if they get there, that is.

Will they survive relatively unscathed? Here's what you need to know as the boys in pinstripes, riding a six-game winning streak, enter the toughest part of their regular-season schedule.

Another Bout with Trout:Mike Trout has performed very well in 34 career games against the Yankees. He's a career .325 hitter against the Bronx Bombers, and his .627 slugging percentage against them is his highest against any AL team.

His 10 stolen bases against the Yankees are also his most against any nondivisional opponent.

The Yankees have played very well against the Angels at home over the past 10 seasons, going 25-10 in those games. Unfortunately, this series is in Anaheim, where the Yankees are just 14-19 during that same span.

Luis Severino is expected to start the series opener on Friday. He has one career start against the Angels: He allowed six runs (five earned) in six innings in a 10-5 loss on June 22 of last season.

The ALCS Rematch: The Astros beat the Yankees last year in seven games. The home team won every game in the series, which is bad news for the Yankees with this series set in Houston.

Stanton has not fared well in his career against the Astros, hitting .183 with just two home runs in 82 career plate appearances. Judge has fared a little better -- he's 6-for-22 (.273) with a home run, six walks and 11 strikeouts.

The ALDS Rematch:The Yankees rallied to knock off the Indians in the ALDS last season, despite falling behind 2-0 in the best-of-five series. The key to the turnaround was the Yankees' improved pitching.

The Yankees managed to win the ALDS, despite the Indians completely shutting down Judge. He struck out in 16 of his 20 at-bats against the Indians last postseason, going just 1-for-20 (.050) overall.

Stanton has never hit a home run against the Indians. They're one of just four teams Stanton has not homered against (the Orioles, the Royals and the Marlins are the others). Stanton's career vs. the Indians: 3-for-20 (.150), with no home runs or RBIs, four walks and nine strikeouts.

The Rivalry, Renewed:The Yankees and Red Sox have played 98 times since 2013. Each team has won exactly 49 of those meetings.

The most recent meeting between the rivals ... well, let's just say it wasn't exactly friendly.

It's a small sample size, but the Red Sox are one of the few teams Stanton has actually had success against this season. He went 7-for-12 (.583) in the three-game series against the Red Sox from April 10-12.