Amaro: Talking with clubs about ace 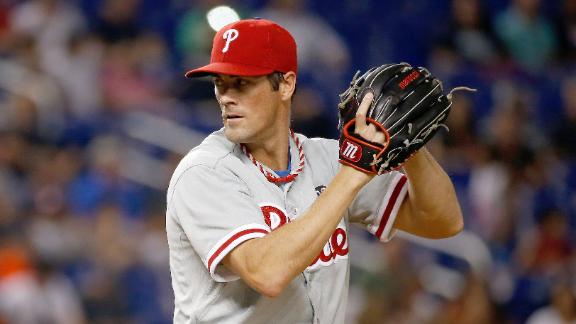 Philadelphia Phillies general manager Ruben Amaro Jr. told ESPN.com Monday that while he wouldn't completely rule out trading ace Cole Hamels in the next week, "I would expect him to be in spring training with the Phillies."

Amaro's assessment came on the day Hamels' most aggressive pursuer in recent weeks, the San Diego Padres, agreed to a four-year contract with free-agent starter James Shields. The signing of Shields would appear to take them out of the running for Hamels, a San Diego native, even though sources have said that Hamels has ranked above Shields on the Padres' offseason shopping list for most of the winter.

Amaro has made no secret, throughout the offseason, that he was willing to listen to offers for the 31-year-old Hamels, who is coming off a season in which he finished fifth in the National League in ERA (2.46) and second only to Clayton Kershaw in Wins Above Replacement (6.9). The Phillies have embarked on an aggressive rebuilding course this winter, have already traded away longtime shortstop Jimmy Rollins and view dealing Hamels as the potential centerpiece of that reconstruction project.

However, clubs that have been talking to the Phillies say Amaro has told them that he needs to "win the deal" in order to trade Hamels, and that the Phillies have been willing to pay little or none of the $96 million remaining on Hamels' contract over the next four seasons. So increasingly, other teams expect the Phillies to keep Hamels for now and to ramp up efforts to move him again in July.

Amaro said Monday that he is still talking with several clubs about his ace, and said "there are teams interested -- and should be -- in a guy like Cole. But clearly, we haven't gotten to the finish line with those teams."

Asked if he believes it's still possible he could trade Hamels before, or possibly during spring training, now that the three biggest free-agent starters -- Shields, Max Scherzer and Jon Lester-- are finally all off the market, the Phillies' GM left that door open, but barely.

"As long as he's still with us, there's a chance something could happen," Amaro said. "I can't really handicap it. It certainly seems likely he'll be in camp with us, but it can change. Guys get hurt in spring training a lot. Teams can have different assessments of where they are as they begin to look at their club. There's a whole slew of different circumstances that could affect how teams view their club. So maybe somebody could change course."

But Amaro said that merely removing the prime free-agent options on this market might not change the trade landscape significantly in the case of a high-salaried pitcher like Hamels.

"Cole is a unique situation. (To acquire him) requires talent and money," Amaro said. "So it's a totally different dynamic than it would be for someone to acquire one of the free agents. So I'm not really sure what the direct impact is, or whether there is a direct impact."

Hamels' partial no-trade clause allows him to block trades to all but eight teams. And four of those eight teams -- the Padres, Rangers, Dodgers and Cardinals -- are said by sources to have stayed in contact with the Phillies on Hamels of late.

But the Padres now have signed Shields. The Rangers traded for Milwaukee's Yovani Gallardo. And the Dodgers and Cardinals have said publicly they're satisfied with their current rotation options. So at this point, with the first day of spring-training workouts just a week and a half away, a Hamels trade appears more improbable than ever. And other teams say Amaro has shown no interest in lowering the price.

The Phillies also have talked with the Milwaukee Brewers and Toronto Blue Jays about potential deals involving closer Jonathan Papelbon. And while sources have said those talks are "not dead," there is no indication they've progressed in any meaningful way.

Asked to describe where his trade discussions for Papelbon stand, Amaro replied: "Same as last week, and a couple of weeks ago, and the week before that. Not much has changed. We're still having dialogue. But not much has changed."

Schoenfield's Preseason Rankings: 25-30
David Schoenfield looks at the bottom of his preseason rankings, where the Cole Hamels question is the biggest story for the Phillies and the Braves have fallen from 90-plus wins to the bottom tier in the majors.
Related topics:
sportsespntradepitcheraceruben amaro jrcole hamelsphiladelphia philliesmlb
Copyright © 2022 ESPN Internet Ventures. All rights reserved.
TOP STORIES
AccuWeather Alert: Messy morning
Deadly Bronx house explosion caught on camera
Supreme Court allows Jan. 6 committee to get Trump documents
School Closings
Find out which schools are closed in your district.
Watch NatGeo documentary 'The First Wave' free for 48 hours
Cardi B offers to pay for funerals of all 17 Bronx fire victims
Starbucks no longer requiring US workers to be vaccinated
Show More
Local twins finalists for one of the top science prizes in the nation
Times Square subway shove suspect ordered held without bail
Third teen sentenced in murder of Barnard student Tessa Majors
Rescue captured on bodycam video after 3 break through thin ice
French actor Gaspard Ulliel dies after ski accident
More TOP STORIES News