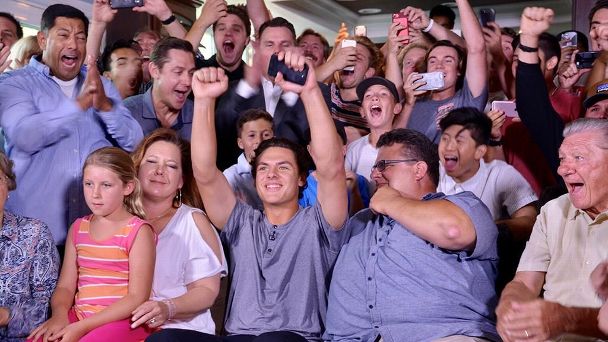 While a handful of top prospects attended the live draft at the MLB Network studios in Secaucus, New Jersey, others held watch parties back home with family and friends.

Here are some of the joyous celebrations that ensued around the country, as well as social reaction from the new pros as the first round of the draft unfolded.

High school pitcher/shortstop Hunter Greene received recognition from current big leaguers, as well as TV and radio host Larry King, after the Cincinnati Reds selected him with the No. 2 overall pick.

No. 6 and No. 15 overall picks Austin Beck and J.B. Bukauskas reacted on Twitter after being drafted by the Oakland Athletics and Houston Astros, respectively.

Florida pitcher Alex Faedo was unaware that the Detroit Tigers made him their selection at No. 18 because the right-hander was busy helping lead the Gators into the College World Series.

After he pitched two scoreless innings against Wake Forest, Florida baseball jokingly tweeted that MLB wouldn't be allowed to steal him away from the program.

The MLB draft continues with Rounds 3-10 on Tuesday starting at 1 p.m. ET.