ESPN
By Jerry Crasnick
Several months ago, when Jose Reyes was a veteran player shrouded in controversy and the New York Mets were brimming with optimism about a second straight playoff appearance, it was inconceivable to think he would escape baseball purgatory and find refuge in their dugout in the 2016 season.

The latest union between Reyes and the Mets, which engendered a statement of apology from the player and a cautious show of faith by Mets general manager Sandy Alderson, says something about the lengths teams will go and the potential backlash they're willing to incur when they're desperate for help between the lines. In Reyes' case, the Mets' desperation resulted in an opportunity that many baseball observers thought might never come.

The Mets added another dose of chaos to a season dotted with minefields when they announced a flurry of transactions Saturday. Brandon Nimmo, New York's top pick in the 2011 first-year player draft, has arrived from Triple-A Las Vegas, where he was hitting .328 with a .917 OPS. In a corresponding move, the Mets demoted Michael Conforto, their 2014 first-round selection, in hopes that he can rediscover his swing and his confidence amid less pressure-packed circumstances in the Pacific Coast League. In a third transaction, the Mets dipped into their past and consummated a minor league deal with Reyes, whose road back to Flushing will begin with a rehab assignment with the Class A Brooklyn Cyclones.

The three moves came in response to an offensive downward spiral that has been John Mayberry Jr.-and-Eric-Campbell, middle-of-the-lineup-caliber bad for New York. In the month of June, the Mets are hitting .238 as a team and rank last among the 30 MLB teams with 73 runs. That's 10 fewer runs than the Philadelphia Phillies, who keep reliving the Ryan Howard cleanup experience, even though he's hitting .153 this season.

Reyes, who is expected to bounce all over the field once he joins the Mets, is a world removed from the ebullient kid who smiled constantly, played with a bounce in his step and won a National League batting title before signing a $106 million free-agent deal with the Miami Marlins in 2011. He has lost the burst that allowed him to lead the NL in stolen bases three years running from 2005 to 2007, and he was exposed as a substandard defensive shortstop several years ago by the game's new defensive metrics.

But more than the questions about his recent performance, Reyes returns to the Mets after putting himself in the news for all the wrong reasons over a span of months, which is why he was available at all. In October, he was arrested after a physical altercation with his wife at a Hawaii resort. Although the charge was dropped in April, Major League Baseball suspended Reyes through May 31 for violating the game's domestic abuse policy.

Reyes' suspension cost him $6.25 million in salary, and he became a free agent Saturday, after the Colorado Rockies placed him on waivers and no one put in a claim. If any other teams were interested in acquiring him, those rumors never gained any traction publicly.

Mets management will learn soon enough if Saturday's moves have the desired effect. Back in March, when media members and prognosticators wondered if the Mets could make the playoffs for a second straight season, it stood to reason that the biggest obstacle would be whether the young pitchers could avoid the dreaded "October hangover" and remain healthy and productive from April through September. As we near the midway point of the season, it has been a mixed bag. Matt Harvey has a 4.64 ERA, Steven Matz and Noah Syndergaard have endured their physical flare-ups, and all those tight games are makingeven the perpetually media-friendly Terry Collins testy.

The bigger challenge for general manager Sandy Alderson, as well as Collins, has been finding ways to replace one offensive piece after another -- after another. David Wright is probably finished for the season after neck surgery. Lucas Duda is still out because of a back injury. Curtis Granderson is hitting .219 with a .315 OBP in the leadoff spot. Yoenis Cespedes is playing through a sore wrist, while Neil Walker's back recently flared up on him. When the organizational mantra is, "Thank heavens for James Loney," you know it hasn't been the smoothest ride.

Even so, the Mets entered the weekend 39-33 and near the top of the NL wild-card pack. While the Cardinals, Pirates and Dodgers navigate their own issues, the Mets are enjoying the luxury of time for their injuries to heal and their outlook to improve.

In the meantime, Alderson and his front-office team will keep searching for solutions and productive bats. If that means leaning on a young Brandon Nimmo or recycling a damaged Jose Reyes for an ambivalent nostalgia tour, that's a chance the Mets are willing to take. 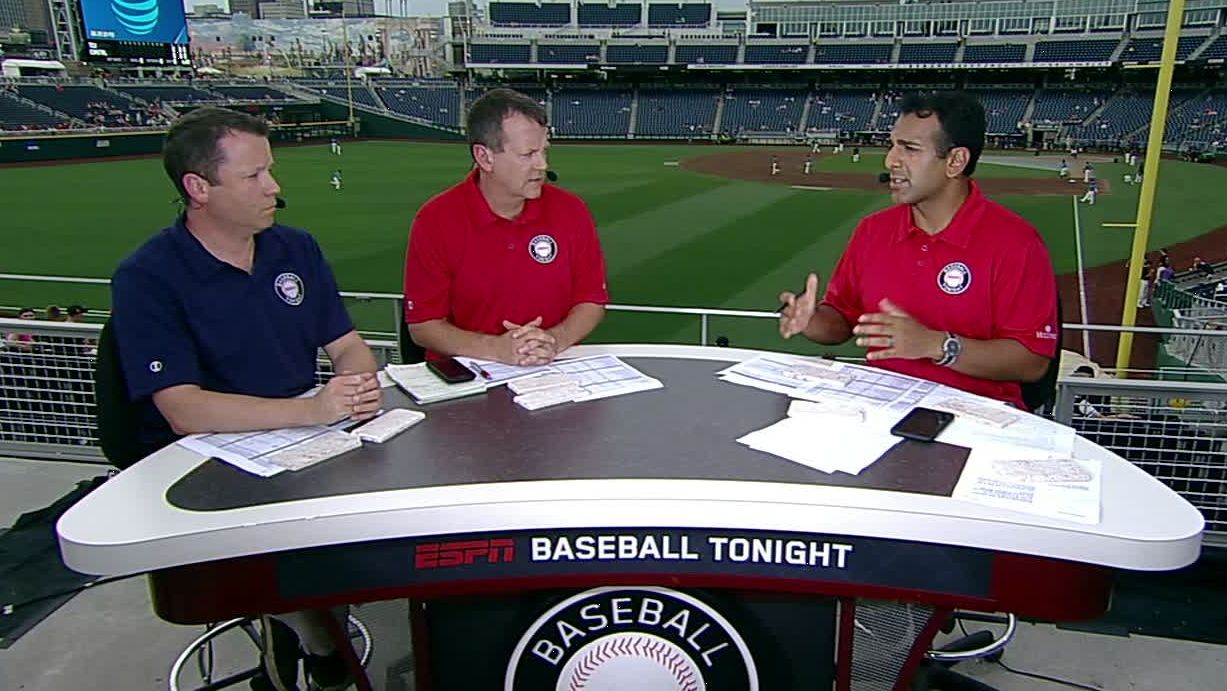