Andre Johnson not at Texans' OTAs 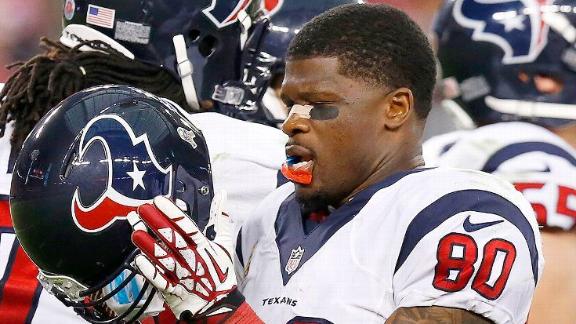 HOUSTON -- Texans receiver Andre Johnson stayed true to his word and did not attend the first day of organized team activities Tuesday.

The seven-time Pro Bowler said two weeks ago that he did not plan on attending OTAs or the Texans' mandatory minicamp in June.

First-year coach Bill O'Brien repeated his comments from two weeks ago that he and Johnson have had positive conversations.

"I have a ton of respect for him," O'Brien said Tuesday. "We'd love to have him here now. That's up to him."

OTAs are voluntary under the league's collective bargaining agreement.

Johnson has not attended any of the Texans' offseason program, which began April 7. He made it clear to the team that he was unhappy prior to speaking publicly about it.

What exactly Johnson wants changed isn't clear. When he spoke two weeks ago at a charity event, Johnson said he wondered if Houston was the right place for him but added that he hadn't requested a trade or spoken to anyone about his contract.

Johnson, the third pick in the 2003 draft, also talked about playing for his third head coach with the Texans and the fact that Houston has had only three winning seasons since he joined the team in its second year of existence.