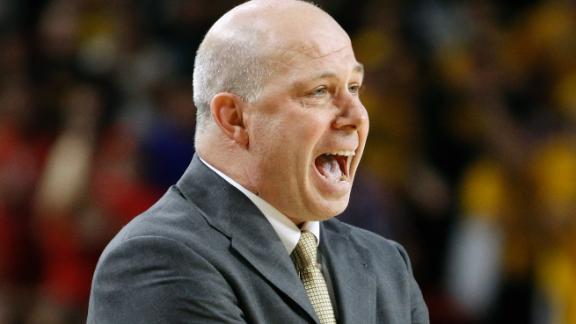 Sendek was fired Tuesday after nine seasons with the Sun Devils, who went 18-16 and missed the NCAA tournament this year.

Capel, 40, the former head coach at VCU and Oklahoma, is currently an assistant at Duke.

"They have interest," a source told ESPN.com's Myron Medcalf. "They've told [Capel] it's his if he wants it."

Sendek, 51, went 159-137 in his nine seasons at Arizona State. He had a short meeting with athletic director Ray Anderson on Tuesday morning before the decision was made.

"This has not been an easy decision for me," Anderson said in a statement released by the school. "Herb has been a tremendous asset to this university and a pillar of our community, and his tenure over the past nine years has helped shift the direction of this program."

Known for his intellect, basketball and otherwise, Sendek arrived in Tempe in 2006 after 10 seasons at NC State.

Sendek and the Sun Devils suffered through an 8-22 first season, but Arizona State reached the NCAA tournament in 2008-09 after going 25-10.

Sendek was named the Pac-10 coach of the year after the Sun Devils won 22 games the following season, but they were not invited to the NCAA tournament.

A pair of losing seasons followed before Arizona State won 22 games in 2012-13 and yet again found itself snubbed by the selection committee.

Sendek pulled off a major coup before that season, landing Jahi Carson, the dynamic point guard from nearby Mesa. Carson had to sit out his first season in Tempe due to an academic issue, but flourished once he did hit the court.

Behind Carson and 7-foot center Jordan Bachynski, the Sun Devils had their best home record in 40 years while going 16-1 last season and reaching the NCAA tournament. They lost to Texas in the first round on a last-second shot, but the program seemed to be headed back in the right direction.

Arizona State rewarded Sendek with a contract extension through 2019, though the deal was filled with stipulations before the added years would take effect.

The Sun Devils were inconsistent this season, losing at home to Lehigh but also beating rival Arizona, which was a top-five team at the time. Arizona State overcame an 0-4 start in Pac-12 play to win six of its final nine games, but blew a late lead in the conference tournament while losing to last-place USC in the opening round.

ESPN.com's Jeff Goodman, Andy Katz and Myron Medcalf and The Associated Press contributed to this report.