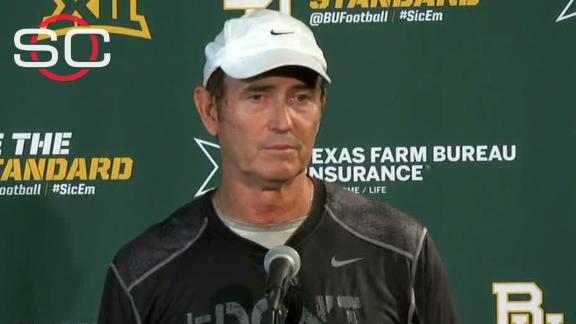 WACO, Texas -- In his first public comments on Sam Ukwuachu in 10 days, Baylorcoach Art Briles said Monday his team has not been distracted by the swirling controversy.

"Honestly, I haven't felt anything," Briles said. "The thing about youth that keeps me going is they're so resilient, first and foremost, and forgiving, nonjudgmental. Just have good spirits and high hopes. So that part of it has been extremely, I don't want to say refreshing, but encouraging. That part has allowed us to function as normal as possible."

Baylor will open its season Friday night at 7 p.m. ET on ESPN against SMU, but instead of the media attention being on whether the fourth-ranked Bears can repeat as Big 12 champions, the focus has been on Briles and how the school handled a former defensive end.

Ukwuachu was recently sentenced to 10 years' probation and six months in county jail for the sexual assault of a former Baylor soccer player in October 2013. He transferred to the school in 2013 after being dismissed from Boise State.

In a statement Friday, Baylor president Ken Starr recommended the university retain outside counsel to conduct the internal inquiry into the university's handling of Ukwuachu.

Briles deflected talk on whether the criticism the school has faced has been warranted.

"Everybody is entitled to their opinion," Briles said. "I've never tried to tell anybody what to think or how to think. I've just tried to live in a fashion that makes them think a certain way. So to answer whether it's warranted or unwarranted, I haven't felt that."

Following Briles' 16-minute news conference in which he did say Starr's decision to hold an external investigation is good, Baylor athletic director Ian McCaw met with reporters but declined to discuss the specifics of the Ukwuachu case.

"We're fully supportive of President Starr making the announcement that he was going to bring in an external investigator," McCaw said. "Baylor Athletics will cooperate fully with the investigator as they go through this review process."

When asked multiple questions about Baylor's handling of Ukwuachu, McCaw offered no further comment other than repeatedly stating he's supportive of Starr calling for an external investigation.

Baylor will also hire a staff member responsible for overseeing student-athlete behavior. McCaw said he's already spoken with two schools -- Ohio State and UNLV -- that have staffers in similar roles for advice as BU works to create the new position.

Ukwuachu transferred to Baylor after being dismissed from Boise State in May 2013. He never played in a game for the Bears but did earn his degree from Baylor. His victim has hired a law firm experienced with Title IX litigation to represent her in potential civil litigation.

McCaw added he was "really pleased" that he and his fellow Big 12 ADs voted unanimously last week to adopt policies that would ban member institutions from accepting transfers from players who have a history of sexual or violent misconduct.

Art Briles: Baylor not distracted by Sam Ukwuachu controversy
Baylor coach Art Briles says the team has not been distracted by the controversy around Sam Ukwuachu, who was recently sentenced to 10 years' probation and six months in county jail for the sexual assault of a former Baylor soccer player in October 2013.