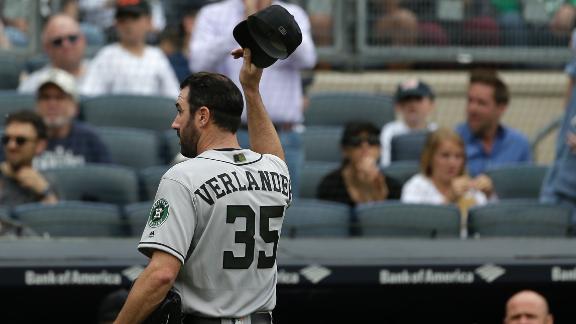 Verlander slowed the highest-scoring team in the majors, picking off a familiar opponent by pitching the Houston Astros past New York 5-1 on Monday.

"I've had some success against them in the past," he said. "Every day is a new day, especially going up against a lineup like that."

Facing the only club in baseball that hasn't been shut out this season, Verlander (7-2) blanked the Yankees until Greg Bird hit a leadoff home run in the seventh.

When he left later in the inning with a major league-best 1.11 ERA, Verlander got a cheer from a solid contingent of Astros fans wearing bright orange behind the dugout -- and even louder jeers from the local fans.

Verlander enjoyed the moment, taking off his cap and waving it toward the Bronx boobirds.

"Just having fun," he said. "Yankees fans having fun with me, so I decided to have some fun back."

Verlander said he was surprised -- he seemed disappointed, in fact -- that he didn't draw more catcalls when his name was announced in pregame introductions.

"I've come to find here at Yankee Stadium, it's a term of endearment," Verlander said. "So thank you."

Closer Ken Giles, tagged Sunday as the Astros blew a five-run lead in the ninth at Cleveland, pitched the final inning and worked around a leadoff single.

Verlander has dominated the Yankees in his most recent outings. He was the MVP of the AL Championship Series in October, going 2-0 and limiting New York to one run in 16 innings while striking out 21.

Earlier this month, Verlander pitched eight shutout innings against the Yankees and fanned 14. This time, Verlander allowed five hits in 6 2/3 innings, fanning five without a walk.

In 12 starts this year, the big righty has permitted only 10 earned runs.

"You know you're up against one of the game's best," Yankees manager Aaron Boone said. "That said, I know we're always in it. Even felt that way today."

For all the heat Verlander brought to the plate, the best toss he made might've been a throw in the opposite direction. The Astros led 3-0 when the Yankees put runners at first and second with two outs in the second.

With Miguel Andujar at the plate, Verlander pivoted and picked rookie Gleyber Torres off second base to escape.

"To be able to steal outs," Verlander said, "those are game-changers."

Davis hit his first homer of the season, connecting in the second off Domingo German (0-3). Altuve, whose team-record run of 10 straight hits ended Sunday, added his fourth home run in the eighth.

Torres has been swinging a sizzling bat, and Boone moved him up to fifth, his highest spot in the lineup yet. The 21-year-old newcomer singled off Verlander but got picked off.

Torres nonchalantly tossed a throw from second base, and the errant toss set up Evan Gattis' RBI single in the fourth. Torres flung his glove in the dugout when the inning was over. Torres also made two acrobatic catches ranging into shallow center field.

"I'll be better tomorrow and try to do my job," he said.

Astros pitcher Lance McCullers Jr. roots for theHouston Rocketsand planned to watch Game 7 of the Western Conference finals vs. Golden State a few hours later. "I'm sure there will be a text going out tonight, to see who wants to get together to see it," he said. Asked for a prediction, he picked the Rockets 97-91.

Rudy Giuliani was at the ballpark with his son on his 74th birthday. The former mayor recalled pitching in a celebrity softball event at Yankee Stadium. "We won. I'm 1-0 here," he said on the field before the game. The longtime Yankees fan likes the look of the current team, especially Torres. "Quick bat. Reminds me of a young Alfonso Soriano," Giuliani said.

Clemson football coach Dabo Swinney was on the field as players limbered up. He's coaching a 14-and-under baseball travel team back home in South Carolina. This was his second visit to the new Yankee Stadium. He never got to the old one. "It's historical. It's the best," he said.

Astros: OF Derek Fisher, out with what the team says is "gastrointestinal discomfort," started a rehab assignment at Triple-A Fresno.

Yankees: Slugger Giancarlo Stanton didn't play one day after striking out in all four at-bats against the Angels. Boone said it was merely a day off.

Astros: RHP Charlie Morton (7-0, 2.04 ERA) struck out 10 in a victory over the Yankees on April 30. He started and beat New York in Game 7 of the ALCS last October, pitching five shutout innings.