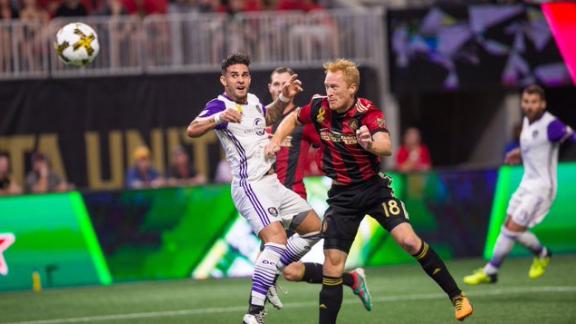 On a record-setting day in Major League Soccer, Atlanta United drew the largest crowd in MLS history before Portland's Diego Valeri became the first to score in eighth consecutive games.

Josef Martinez recorded his second hat trick in four days as Atlanta United entertained an record crowd in a 3-3 draw with Orlando City on Saturday.

Dom Dwyer stunned the 70,425 fans at the new Mercedes-Benz Stadium with a powerful header from Donny Toia's cross to put Orlando ahead in the 10th minute.

Atlanta pushed for an equalizer and found it in the 36th minute when Julian Gressel gathered the ball just before it crossed the endline and sent it under goalkeeper Joe Bendik for Martinez to tap in.

But three minutes later Orlando was back in front after Atlanta keeper Brad Guzan failed to reach Scott Sutter's cross, and it fell to Dwyer to head home his second.

Martinez responded 10 minutes after halftime, equalizing by heading down Chris McCann's cross, but Orlando against needed just three minutes to retake the lead when Dwyer found Cyle Larin with a cross to the back post.

But Martinez, who also scored three times against New England on Wednesday, pulled Atlanta level for a third time by completing his hat trick in the 69th minute when he beat his marker to a low cross and scored at the near post.

Valeri broke an MLS record by scoring in his eighth consecutive game, but the Portland Timbers fell 2-1 to Real Salt Lake.

The Argentine midfielder has scored in every Timbers game since July 29 and broke the previous record of seven straight games that had been accomplished three times.

Albert Rusnak gave RSL the lead in the 14th minute with a scorching shot from 25 yards, but Valeri equalized two minutes after half-time with a free header to break the record.

RSL was undaunted, though, andJefferson Savarino curled a shot into the top corner in the 61st minute to keep his side's playoff hopes alive while preventing Portland from moving to the top of the Western Conference.

Tosaint Ricketts scored twice and Toronto FC stayed on pace to win the Supporters' Shield and break the MLS points record with a 4-0 win over the LA Galaxy.

Toronto widened their lead in the Eastern Conference to 11 points over New York City FC and moved to 62 points, six off the league high set by the 1998 Galaxy, with five games to play.

Ricketts escaped his marker to double the lead in the 37th minute, then added his second of the night on 76 minutes, before Vazquez took advantage of a defensive lapse to tack on a fourth.

Tony Tchani scored in stoppage to haunt his former team and help the Vancouver Whitecaps salvage a 2-2 draw with Columbus Crew SC.

Kekuta Manneh, whom Vancouver traded to Columbus for Tchani in March, put the visitors ahead with a blast from distance in the 63rd minute, butTchani stole a point by turning inMontero's cross in the 92nd minute.

The point kept Vancouver top of the jam-packed Western Conference -- one point ahead of Portland, Kansas City and Seattle -- while Columbus stayed fourth in the East.

Sporting Kansas City rallied for a 3-1 win after New England's Krisztian Nemeth was sent off following a video review.

Teal Bunbury had already put the Revolution ahead in the fourth minute thanks to a massive deflection, but the game changed when Nemeth elbowed Graham Zusi in the face and a brief review confirmed the action worthy of a red card.

Five minutes later, Gerso Fernandes scored from close range to level the score, and Sporting KC took the lead just before the break when Diego Rubio turned in Gerso's cross with a sliding effort.

Rubio got his second in the 57th minute by tapping home after Benny Feilhaber's volley came back off the post as SKC joined the pack fighting for the lead in the Western Conference, moving just a point back of Vancouver at the top.

Dominique Badji scored in the 88th minutes to allow the Colorado Rapids to take a point from a 1-1 draw with New York City FC.

TommyMcNamara had given NYCFC the lead with a remarkable strike in the 19th minute as he ran around a stumbling Josh Gatt before sending a blast over the reach of Tim Howard.

But Badji found the late equalizer when he ran past multiple defenders and fired from the right side of the box to beat NYCFC keeper Sean Johnson.

The Chicago Fire benefited from a brutal own goal in a 3-0 win over D.C. United.

D.C. rookie Ian Harkes tried to head away Matt Polster's long throw into the box, but he sent it right past his goalkeeper Bill Hamid for the opening goal in the 23rd minute.

Brandon Vincent doubled Chicago's lead with a diving header after the hour mark, and Nemanja Nikolic wrapped up the win with a late penalty -- his 18th goal of the season to match a club record.

The Fire moved within three points of NYCFC for second place in the East while D.C. remained at the bottom of the East.

Danny Hoesen scored the only goal to give the San Jose Earthquakes a 1-0 win over the Houston Dynamo.

Hoesen brought down Kofi Sarkodie's cross in the box, spun and fired on target in the 32nd minute.

San Jose jumped Houston and FC Fallas to move into fifth place in the West, where four clubs are fighting for the final two playoff spots.

Abu Danladi scored in the 89th minute to lift Minnesota United to a 3-2 win at the Montreal Impact, who suffered a fourth consecutive defeat after an equally long win streak.

Montreal's Patrice Bernier put a shot into the roof of the net to open the scoring in the ninth minute, and it could have been 2-0 but Bobby Shuttleworth saved Ignacio Piatti's penalty.

Kevin Molino then converted a penalty to equalize for Minnesota, but early in the second half Montreal again went ahead when Blerim Dzemaili blasted a shot home on the half-volley.

However, Christian Ramirez leveled the score again five minutes later with a header from a tight angle, beforeDanladi completed the comeback by unleashing a rocket inside the far post after controlling the ball in the right side of the box.

FC Dallas shared a goalless draw with the Seattle Sounders.

Kellyn Acosta came closest to breaking the deadlock in the 42nd minute when he forced a diving save from Seattle keeper Stefan Frei with a low shot from distance.

The Sounders missed a chance to go top of the West table and instead remain a point back of leaders Vancouver.

RSL 2-1 Portland: Stunners and history
Albert Rusnak and Jefferson Savarino led RSL to a big win over Portland, despite a historic goal for Diego Valeri.

Vancouver 2-2 Columbus: Tchani's late heroics
Former players for both Vancouver and the Crew haunted their old teams, in an exciting 2-2 draw in Canada.

Sporting KC 3-1 Revolution: SKC comeback at home
For the second match in a row the Revolution had a man sent of after a VAR ruling, which SKC capitalized on at home.

Colorado 1-1 NYCFC: Badji plays hero for Rapids
Dominique Badji netted his eighth goal of the season late in the second half, after NYCFC had led since minute 18. 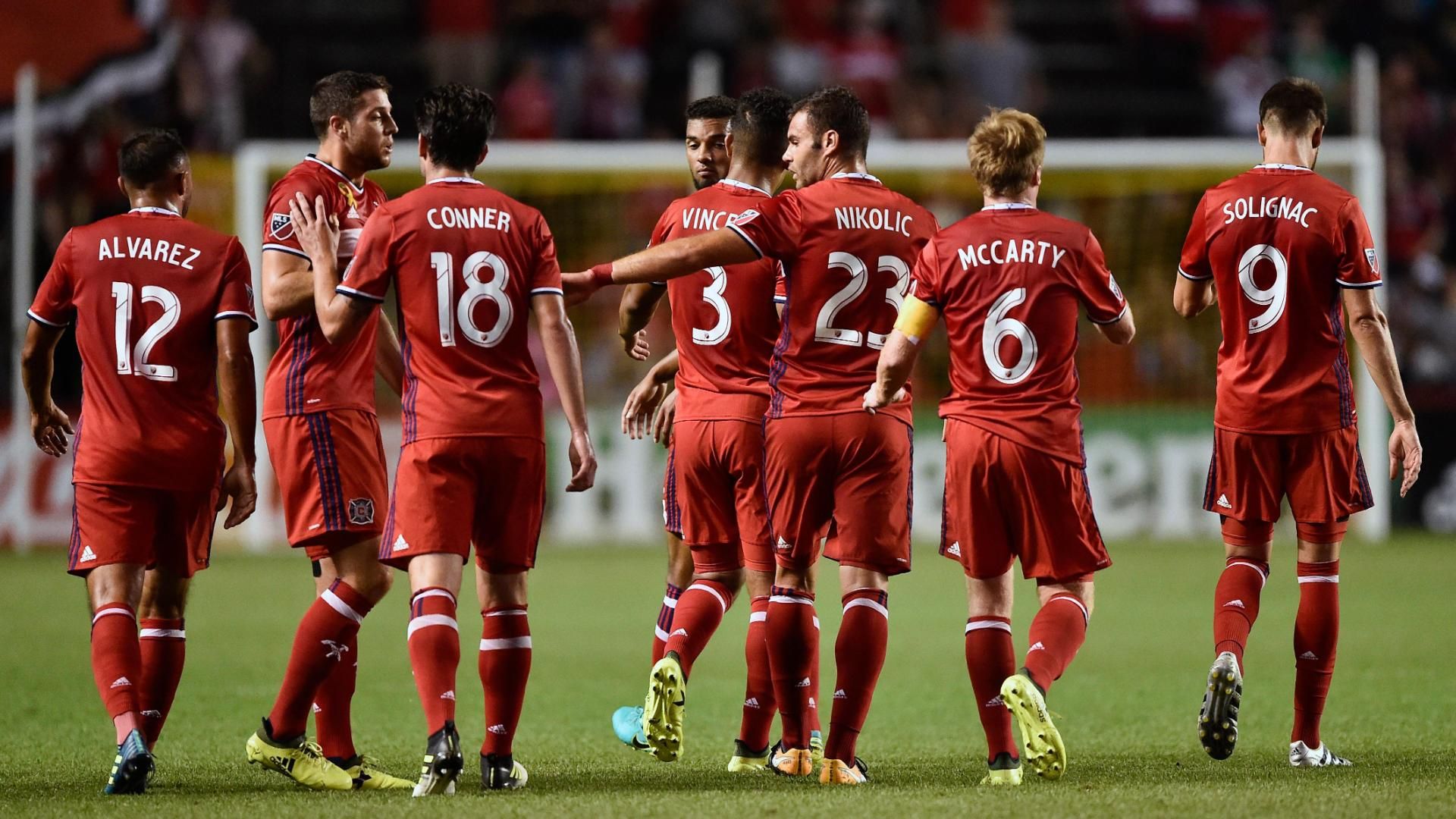 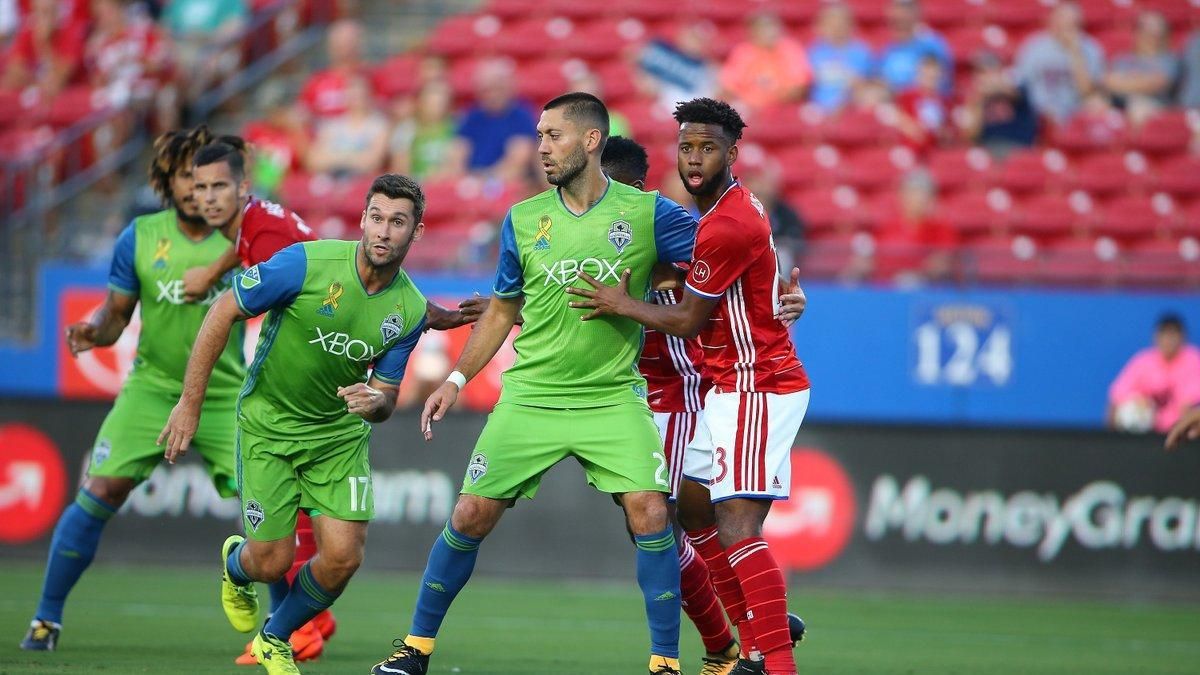