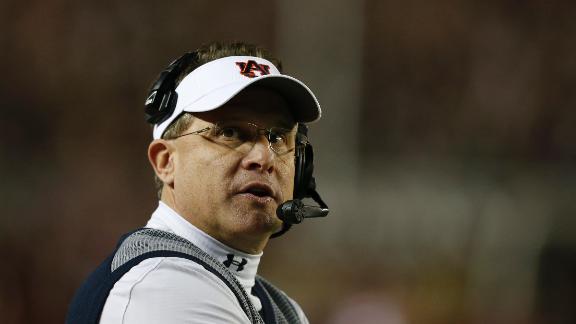 Auburn Police Capt. Will Matthews told The Associated Press police responded at 12:25 a.m. Sunday to a shots-fired call at the Tiger Lodge apartment complex, where the 18-year-old Mitchell was found. Mitchell was later pronounced dead at a hospital.

Matthews issued an agency statement Sunday afternoon that said Markale Deandra Hart, 22, of Camp Hill, Alabama, was arrested on a felony warrant charging him with murder. Hart was being held Sunday afternoon at the Lee County Jail on $150,000 bond.

It was not immediately known whether Hart had an attorney, and the statement didn't provide any details as to how he was taken into custody. Police also disclosed in the statement that Mitchell received multiple gunshot wounds to the chest.

The statement said no additional arrests were expected at this time but didn't elaborate on the shooting and arrest.

Auburn coach Gus Malzahn said in a statement that he was "devastated" by Mitchell's death.

"I'm devastated and saddened by the passing of Jakell Mitchell," he said. "My thoughts and prayers are with Jakell's family and friends, who are suffering through this senseless tragedy. I know the Auburn family is hurting, especially our players and coaches, and we are going to love and support them through this difficult time. We have lost a member of our family too young, too soon."

The apartment complex was quiet Sunday, with large amounts of broken glass on the ground. Police had spray-painted the ground in spots, apparently marking evidence, and a red car with the license plate "Jakell" was seen being towed away.

Mitchell redshirted this season for Auburnout of nearby Opelika High School. He was expected to contend for a starting spot next season at H-back and tight end.

Mitchell missed his senior season at Opelika while recovering from an ACL injury. He rushed for 392 yards and 17 touchdowns in 2013 as a junior.

Mitchell's girlfriend, Ayanna Hughuley, said Mitchell was arguing with a man in the parking lot when a third man pulled a handgun. She said she didn't know what the argument was about and didn't think Mitchell knew Hart.

Drake Ledet, an Auburn sophomore who lives in a building near the complex, told The Associated Press he heard several gunshots shortly after midnight. He said there were two parties going on in the area hours earlier.

"I'd say it was at least eight [shots]," Ledet said, adding that he looked out his window. "People were screaming. ... I saw people scattering everywhere, getting in their cars."

Jeremy Johnson, a backup quarterback, was one of those who drove up before midday Sunday to see the site and remember Mitchell. Johnson said he wasn't present at the time of the shooting but wanted to come after hearing of his teammate's death.

"I couldn't believe it," Johnson said, growing emotional before he left. "Jakell was a real good kid."

Sunday's shooting happened at the same apartment complex where Desmonte Leonard killed three men at a party in the summer of 2012. The complex, located a few miles from campus, is popular with students, and its name was changed after the 2012 shooting.

In October, jurors convicted Leonard of capital murder in the shooting deaths of former Auburn football players Ed Christian and Ladarious Phillips, along with DeMario Pitts. Three other people were wounded.

Leonard's attorney said the shooting stemmed from a fight, and Leonard fired in self-defense. Prosecutors argued Leonard aimed at the victims and wasn't involved in the initial fight.

Leonard will be sentenced Jan. 20. The jury recommended life without parole, but the judge still could sentence him to death.