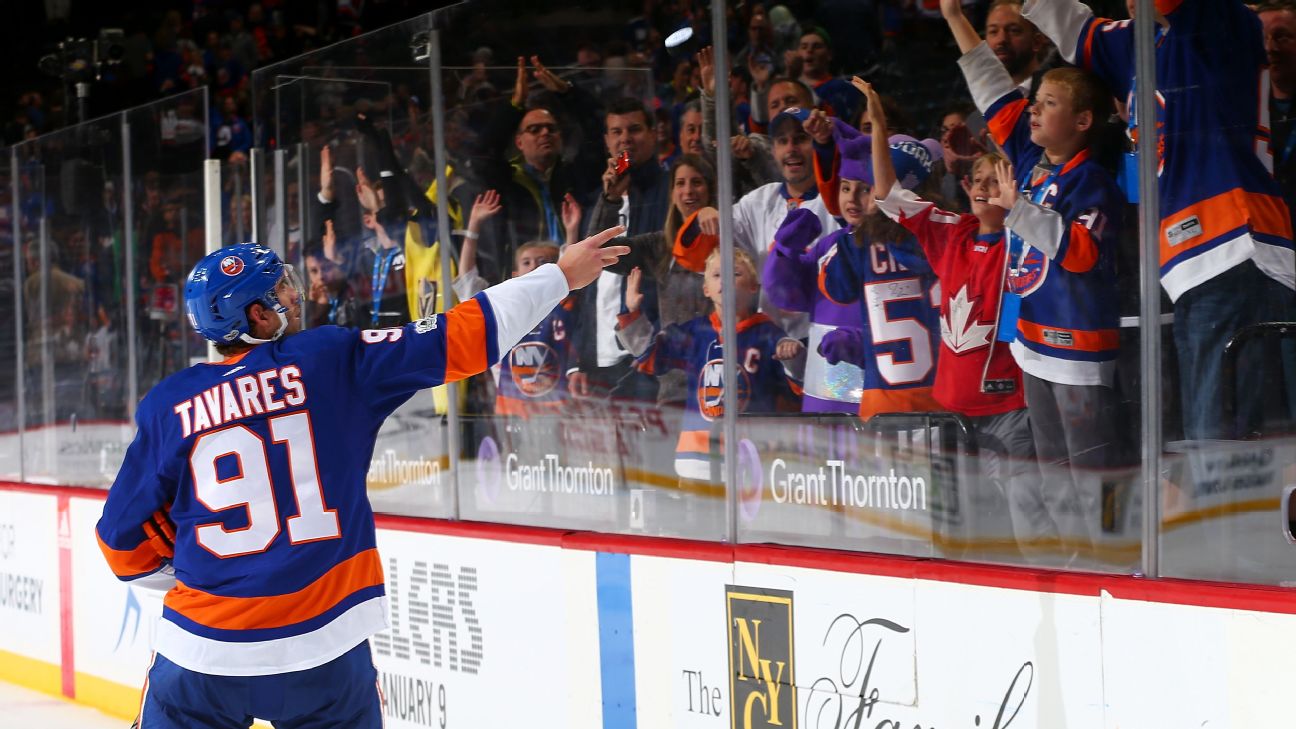 Rosner was hoping all of it was enough to keep Tavares, the team's superstar center, from leaving as a free agent when the market opened on July 1.

"I was literally sitting at the edge of my couch, refreshing Twitter. Talking to other Islanders fans. We were all in the same boat, anxiously awaiting word that he was going to stay," Rosner said.

Tavares, the franchise standard-bearer for the Islanders, signed a seven-year, $77 million free-agent deal with the Toronto Maple Leafs. The stunning move came after months of speculation that Tavares' return to the Islanders was a formality, even during his week of courtship at agent Pat Brisson's CAA office in Los Angeles, where six teams made their pitches for his services.

Also making its pitch: Bagel Boss. The bagel shop sent a box of bagels, dyed in Islanders colors, to the CAA offices. Rosner was told the agency enjoyed them. "I don't think John Tavares ate the bagels because that's not the diet that he's on. But I know for a fact he was aware of it," he said.

But the bagels didn't work. Nothing did. Playing in Toronto was an opportunity Tavares couldn't pass up, he said, because contending for a Stanley Cup with his boyhood team was a dream. That was reinforced by a photograph Tavares put on social media, showing him at 8 or 9 years old sleeping under a Maple Leafs bed sheet.

Some Islanders fans also used social media to express their feelings on Tavares leaving for the Leafs -- by filming themselves burning his Islanders jersey.

had to do it. Hear is my Tavares Jersey burning video! https://t.co/FijDtJaGSK

And a dozen more.

"Fans feel disrespected, and what better way is there to show disrespect by burning the equivalent of a flag, in protest? Personally, I own a Tavares jersey, and having paid what I paid, I don't make a habit of burning money -- so, to each their own," said Michael Schuerlein, an Islanders fan who blogs at Islesblogger.com.

"He has tarnished what little great memories fans have of him. That goal he scored in double overtime to close the series against Florida and move to the second round [in 2016] is practically meaningless now, because he's attached to it. For a lot of people, that's the only time in their adult lives this team has made noise in the postseason, let alone make it out of the first round."

For other fans, the anger is less pointed at Tavares than at the way the situation went down.

"I'm not even mad at Tavares for joining a much better team in his hometown. I get that part and deep down I think most Islanders fans do, too," said Dan Saraceni, an Islanders fan who blogged at Lighthouse Hockey. "What makes us mad is how the whole thing went down -- proclamations of loyalty for years, then distance, then nauseating silence, then 'poof' gone. That's the part that will be difficult to get over."

Schuerlein agreed. "Fans were literally holding the franchise center to his word and feel betrayed by how he and Brisson played this. It's one thing to slowly play a hand, trying to earn the biggest pot, but it's something else to say the right things all year only to come out and say it's a dream come true to play in Toronto. That's the equivalent to talking out of both sides of your mouth. This is -- was -- the face of the franchise, so to see and hear this ... fans have a right to feel hurt, betrayed and even lied to," he said.

There's anger. There's confusion. There are all the emotional reactions one might expect when expectations are subverted and hopes are crushed; when someone who has spoken only about the devotion he had for an organization leaves it behind with a few strokes of a signature on a free-agent contract elsewhere.

What Islanders fans are dealing with in the aftermath of Tavares leaving is how to process that anger. Some choose this:

THE ISLANDERS ARE OUT OF THE RACE FOR TAVARES!!! Isles fans everywhere rn pic.twitter.com/SPjpbe5bAu

Others think that torching Tavares jerseys because he torched the Islanders is the wrong path.

"I'm not a fan of that, whatsoever. It dishonors the Islanders," Rosner said. "As upset as everyone is, and trust me, I'm upset myself, I don't want the world to see this is what Islanders fans do. I don't want other players from other teams to say, 'Hey, if I do something wrong, they're gonna start burning my jerseys.'"

So Rosner and other businesses are offering an enticement to Islanders fans who might be thinking of burning their sweaters in protest.

"My cousins and I decided that we're going to offer a free dozen bagels to anyone that brings in John Tavares shirts, hats or whatever. And we'll donate them to charity," he said, as the shop tried to get #BagelsForJerseys trending the day after Tavares left.

Offside Tavern, an Islanders sports bar in Manhattan, is offering fans 70 percent off their bill if they bring in Tavares gear for trade. "We'll make sure they end up in the hands of someone less fortunate, and hopefully make an Isles fan out of them," said the bar on social media.

How Islanders fans choose to ultimately process Tavares' leaving will vary. But right now, the wounds are fresh and the pain is scorching, even if his jerseys aren't.

"It's stupid to burn your money like that, but I get why people would do it. They're angry and hurt that a guy they put so much faith in ghosted them and walked away. Personally, I opted to put my Tavares shirt in my closet and leave my barbecue for the Fourth of July," Saraceni said.

"Right now, his Islanders legacy is one of failure and tragedy. And while the rest of the hockey world celebrates this superstar's return home to form a superteam, we're left alone in the corner. Maybe time will change that, but I'm not betting on it."