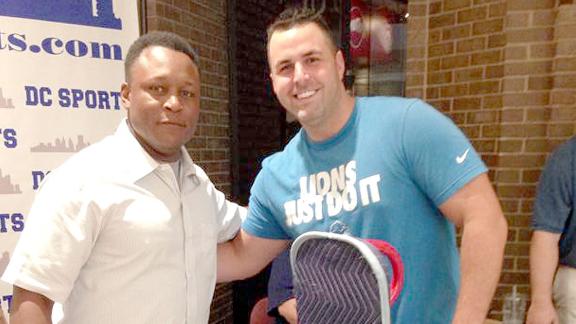 Mike Kozan couldn't believe he asked Barry Sanders to autograph a Pontiac Silverdome urinal a year ago. Now, he can't believe how much attention the autographed men's toilet has received since he decided to auction it off.

That eBay auction ended Thursday night, with the urinal going for $3,000. According to the eBay auction page, 17 people placed 46 bids on the signed urinal from the home locker room of the Silverdome, where the Detroit Lions played during Sanders' tenure with the club.

The winner of the auction is anonymous due to eBay's standards, and Kozan hopes the winning bidder is legitimate. If the bidder isn't, he said, he'll go down the list of bids until he finds a bidder who is legitimate.

Kozan, a 28-year-old from suburban Detroit, said he still plans on donating some of the money -- he said around 10 percent but didn't know an exact figure -- to charity. Kozan reached out to Sanders' agent, J.B. Bernstein, to ask where he could donate money in Sanders' name.

"They didn't give me a charity or anything like that," Kozan said. "But there are a couple charities that Barry has been public about and do it in his name or something."

One possibility could be the Scleroderma Foundation, with which Sanders has been involved. Sanders' sister died of the disease.

After that, Kozan said he would probably put the rest of the money away and that the funds would offset a recent monetary loss on a camper he bought a couple of years ago and recently sold.

More than anything else, though, Kozan said he got an unforgettable story out of the deal -- From buying the urinal for $23 to dragging it to a local mall to have Sanders sign it to then choosing to auction it off and the attention he received from it.

When the Silverdome auction happened, Sanders tweeted he would not sign urinals. Kozan said he didn't know about the tweet until after he had Sanders sign it.

Kozan grew up a huge Sanders fan and already had a signed jersey, hat and football from Sanders. That's where the idea for the urinal, which he bought in a Silverdome auction last year, came about after a joke with his girlfriend.

Initially, Sanders wouldn't sign the urinal, but then after refusing, he decided to sign it and take a picture with Kozan. Perhaps the best running back in NFL history, Sanders played 10 years for the Lions, rushing for 15,269 yards and 99 touchdowns before retiring on the eve of the 1999 NFL season.

"Barry felt bad turning him away after he had lugged the thing down there and waited in line," Bernstein wrote in an email to ESPN.com last week. "It was really my fault because urinals are not listed in the items that Barry won't sign. He is so good to his fans that he will pretty much sign anything, but going forward we now state that Barry reserves the right to refuse to sign any item, and that odd items should be cleared in advance through his memorabilia partner, Schwartz Sports."

Since the auction garnered media attention, Kozan said people at work have started calling him the "urinal guy" and that during a recent work outing to aDetroit Tigersgame, multiple people stopped him to talk about the urinal.

"I have the story now," Kozan said. "I'm glad I did it, and it was a pretty cool experience. I had a TV crew at my house last Friday filming a big piece that they ran all weekend.

"The whole experience has been worth it. Somebody else gets to display it and have it forever. No regrets here."