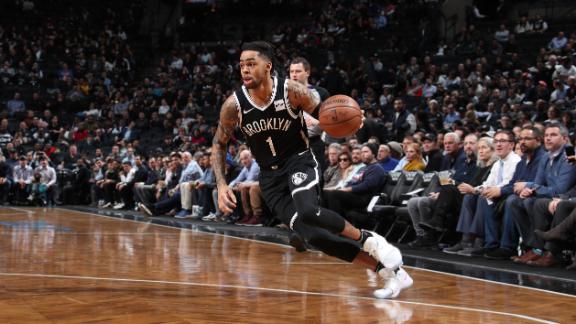 ESPN
NEW YORK -- Bradley Beal capped off the best month of his career with yet another 30-point night.

Now the All-Star guard is looking to carry his hot shooting into March with the eighth and final spot in the Eastern Conference up for grabs.

Beal scored 31 points, Trevor Ariza had 23 points and 10 rebounds, and the Washington Wizards beat the Brooklyn Nets 125-116 on Wednesday night.

Beal finished February averaging a career-high 30.9 points while shooting 52.2 percent from the field.

"It's a huge accomplishment. I just want to win, whatever it looks like," said Beal, who scored 17 points in the first half.

"Sometimes it's going to involve me scoring 30-plus and some nights I won't have to. So whatever it looks like, I want to go out there and get it done. Super confident right now in my game. Just trying to make the playoffs."

The victory moved Washington within three games of eighth-place Charlotte.

Reserve Thomas Bryant had 18 points and Bobby Portis finished with 10 points and 12 rebounds for the Wizards, who led by as many as 28 points. Washington had lost four straight and nine out of 12.

D'Angelo Russell scored 28 points for the Nets, who had their two-game winning streak snapped.

Washington looked like a team on its way to another loss after Brooklyn jumped out to a 10-0 lead on Joe Harris' 3-pointer before Wizards coach Scott Brooks called a timeout with 9:39 to play in the opening quarter.

Washington regrouped and outscored the Nets 34-18 the rest of the period as Beal scored 13 points.

"This one stings. You know you could feel it when everybody was walking into the locker room afterwards," Harris said. "It was really uncharacteristic of our team."

The Wizards then took a 68-60 lead heading into halftime after recording 23 assists on their 26 field goals.

The Wizards then put the game out of reach midway through the third quarter during a five-minute stretch in which the Nets turned the ball over six times and missed four shots.

Beal scored four straight points to open the second half for a 72-60 lead. Ariza later had 11 points in a 17-3 run as Washington extended its lead to 89-65 with 5:55 left in the period on a pair of free throws from Jeff Green.

Brooks, who before the game lauded Ariza for his leadership and said he could have used the forward during his previous coaching stint at Oklahoma City, credited his veteran's activity on defense for breaking open the game.

"Brad has done a great job and I think Trevor has come in and stepped in also," Brooks said. "We need veteran guys that play with that type of edge and he does. He's making some shots tonight. Hopefully that keeps going."

A jumper by Jared Dudley ended Brooklyn's scoreless drought with 5:35 remaining in the quarter.

Wizards: C Dwight Howard (back surgery) joined the team for its short two-game road trip. He did some agility drills prior to the game. Brooks said he was unsure when Howard will return.

Nets: G Allen Crabbe's first 3-pointer of the night was his 287th as a member of the Nets, moving him past Richard Jefferson into sole possession of 10th place in franchise history. Crabbe has made 288 3s as a Net since coming over last season.

REINFORCEMENT IS ON THE WAY

Spencer Dinwiddie, who has missed his last 13 games due to torn ligaments in his right thumb, is close to returning for the Nets.

Dinwiddie participated in a pregame workout and Brooklyn coach Kenny Atkinson is aware the combo guard's return to the lineup could balance an offense that has relied more often on the 3-point shot instead of driving in the lane.

The Nets shot 19 for 50 from long distance in Monday night's win over San Antonio.

"I'll say this, he is very close to returning. Very close," Atkinson said. "I'll leave it at that. Very close. He's been doing a lot on the court. I think he's close to being ready."

Atkinson considers New York City playground legend "Pearl" Washington as perhaps the best high school basketball player in the city. But he also recalls the handful of times he matched up against Nets great Kenny Anderson, who is recovering from a stroke he suffered Saturday night.

Atkinson was on the 13th-seeded University of Richmond team that surprised Anderson's fifth-seeded Georgia Tech team in the second round of the 1988 NCAA Tournament.

"He had a sixth sense, like that city sense that guys like me didn't have," Atkinson said. "Incredible instincts to steal the ball, to see the court, quick as .Tiny Archibald. I loved that. I was a huge Kenny Anderson fan and I know what a great player he was."