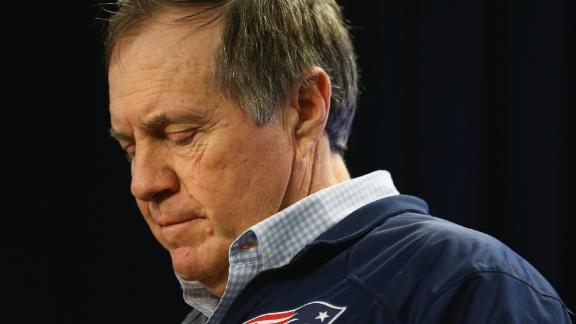 FOXBOROUGH, Mass. -- New England Patriots coach Bill Belichick said Thursday he was "shocked" when informed of the allegations that his team used balls that were deflated after they were inspected by officials before Sunday's AFC title game.

Belichick's 11-minute news conference was devoted completely to the controversy. He said the Patriots are fully cooperating with the NFL's investigation, and his remarks now shift the attention to quarterback Tom Brady's role in the matter.

NBC News reported that Brady addressed the issue with his teammates Thursday, saying in a closed-door meeting that he likes footballs "a certain way" and that they should stay focused on the Super Bowl.

Belichick said Brady, who is scheduled to talk to the media at approximately 4:15 p.m. ET Thursday, can detail more about how he prefers his footballs.

"I was shocked to learn of the footballs on Monday. I had no knowledge until Monday morning," Belichick said. "I'd say I've learned a lot more about this process in the last three days than I knew, or had talked about it, in the last 40 years that I've coached in this league."

The NFL found that 11 of the Patriots' 12 game balls were inflated significantly below the NFL's requirements, league sources involved and familiar with the investigation of Sunday's game told ESPN's Chris Mortensen.

Answering questions from reporters after an opening statement that lasted about eight minutes, Belichick repeated multiple times, "I have no explanation for what happened" and "I've told you everything I know."

"In my entire coaching career, I have never talked to any player or staff member about football air pressure," he said. "The footballs are approved by the league and officials pregame, and we play with what's out there. That's the only way that I have ever thought about that."

"I think we all know that quarterbacks, kickers, specialists have certain preferences on footballs. They know a lot more about it than I do. They're a lot more sensitive to it than I am," he said, having earlier detailed his coaching philosophy of always making things difficult for players in practice as it relates to the condition of footballs.

"I hear them comment on it from time to time, but I can tell you and they will tell you that there is never any sympathy whatsoever from me on that subject. Zero. Tom's personal preferences on his footballs is something he can talk about in much better detail and information than I can possibly provide."

Belichick said that, because of this controversy, the Patriots will make one change in the future by inflating footballs beyond the minimum specifications of 12.5 pounds per square inch.

"Obviously, with our footballs being inflated to the 12.5-pound range, any deflation would then take us under that specification limit," he said.

"Knowing that now, in the future, we will certainly inflate the footballs above that low level to account for any possible change during the game."

Patriots running backLeGarrette Blountsaid the balls being used in Sunday's game felt normal to him.

"I don't know what the proper inflation feeling is but it felt like a normal ball," he said.

Cornerback Kyle Arrington said Thursday that the Patriots need to "ignore the noise."

"It sounds like I'm preaching at this point, but that's our motto. It's what we firmly believe in," he said. "We have one job to do and hopefully we will come out on top of this one. Just let the dust settle."

Wide receiver Matthew Slater was asked Thursday about the Patriots being labeled "cheaters."

"I'm not really aware of what's being said outside of the locker room. ... It's unfortunate. We'd rather be celebrating our trip to the Super Bowl. But the situation is what it is," he said.

Under NFL rules, no alteration of the footballs is allowed once they are approved. If a person is found breaking league rules and tampering with the footballs, that person could face up to a $25,000 fine and potentially more discipline.

Belichick: I Don't Have An Explanation
Patriots coach Bill Belichick addresses the media regarding allegations that his team used footballs that were deflated after they were inspected by officials before the AFC Championship Game.

Do You Believe Belichick?
Jerome Bettis and Brian Dawkins react to Bill Belichick's news conference on the underinflated footballs and discuss whether they believe he had no knowledge of the underinflation issues.