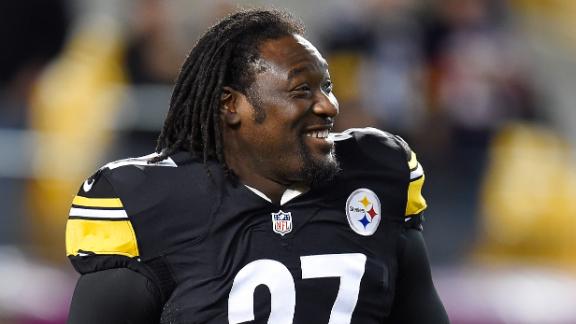 PITTSBURGH -- Running back Le'Veon Bell has spoken with friend LeGarrette Blount, but like the Steelers themselves, he is moving forward after the team cut ties with the veteran running back Tuesday.

The Steelers waived Blount less than 24 hours after he left the field before the end of the 27-24 win over the Tennessee Titans because the fifth-year veteran was upset he did not receive any carries in the game.

Blount went unclaimed on waivers, a source told ESPN NFL Insider Adam Schefter, and he is now free to sign anywhere. Blount was at the Patriots facility Thursday morning and is expected to sign with the team, a source told ESPN's Josina Anderson.

"It was surprising because I didn't see that coming," said Bell, who rushed for 204 yards on 33 carries, both career highs, against the Titans. "There's some things you can't do. He pushed those buttons, and that's what happens."

Bell's emergence as one of the top running backs in the NFL came at the expense of Blount and helped hasten his exit from the Steelers. Blount rushed for 266 yards and two touchdowns this season but carried the ball only five times in the Steelers' past two games and did not gain a yard.

Bell, who is second in the league with 951 rushing yards, had been Blount's closest friend on the team. Both were punished by the team after they were arrested in August for misdemeanor marijuana possession.

"He's doing good," Bell said. "Obviously he's not in the best [place] but he understands he made a mistake. But it is what it is.

"He made his decision and he has to live with it."

Offensive coordinator Todd Haley said the Steelers were already phasing Blount out of the offense before they decided to release him.

The Steelers took a risk in cutting Blount because they have almost no experience back behind Bell. Rookie Dri Archer (eight carries, 41 yards) has played sparingly, and the team promoted another rookie, Josh Harris, from the practice squad to take Blount's spot on the 53-man roster.

Bell rarely comes off the field because he also excels as a receiver and in pass protection. But the second-year player said he is fresh, even 11 games into the season, and capable of handling a bigger workload.

He and the Steelers (7-4) get extra time to rest because the team is on its bye week.

Patriots Expected To Sign Blount
Adam Schefter breaks down why the Patriots are interested in bringing back LeGarrette Blount.