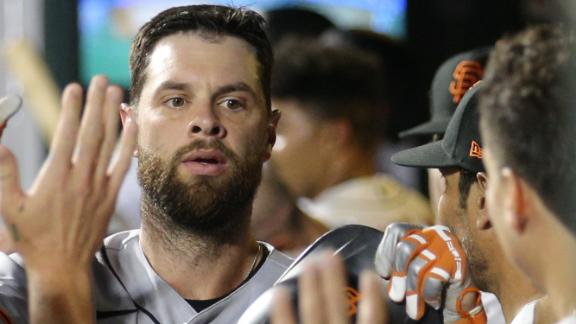 After using late-game homers to steal consecutive victories from Oakland on Saturday and Sunday, San Francisco powered up early at Citi Field. LaMonte Wade Jr. and Mike Yastrzemski also connected in the first four innings as the Giants jumped to a 7-0 advantage against rookie Tylor Megill (1-3).


The lone concern for the Giants: seven-time All-Star catcher Buster Posey was removed with left knee discomfort in the fifth, one inning after being visited behind the plate by manager Gabe Kapler and a trainer.

The Mets had hoped for a jolt in shortstop Francisco Lindor's return after five weeks away with a right oblique strain. Instead, they managed five hits and lost for the ninth time in 11 games.

Belt ended a 2-for-30 skid with two homers and a single in his first three plate appearances and added an RBI infield single in the eighth for his season-high fourth hit. The 33-year-old had never topped 18 homers in the big leagues.

The major league-leading Giants have won 20 of 27 games while trying to hold off the Dodgers in the NL West. San Francisco entered Tuesday with a 2 1/2-game lead.

Long (2-1) tossed three-hit ball over 5 1/3 innings. The 26-year-old hadn't pitched above low-Class A prior to this season, but the left-hander with a big-breaking curveball was sharp in his sixth big league start, striking out four and walking one.

Megill was clobbered for a career-worst seven runs on 11 hits and five walks over 3 2/3 innings. The rookie right-hander limited San Francisco to a run over six innings last Wednesday.

Yastrzemski's two-run homer in the second was his 20th of the season, and Wade's two-run drive in the fourth was his 17th.


Lindor flied out to the warning track in his first at-bat and hit a would-be homer just foul in the fourth. He ended up hitless in four at-bats.

The shortstop played alongside newcomer Javier Báez for the first time. They came up short on their first attempted double play when Belt beat Lindor's feed to second, although Báez still got the ball to first in time to retire Posey.

Acquired from the Chicago Cubs at the trade deadline, Báez returned Sunday after missing 11 days with a back injury and had two doubles.

The 34-year-old Posey has had a resurgent year after skipping the 2020 coronavirus-shortened season when he and his wife adopted twin girls that were born prematurely. The 2012 NL MVP singled and scored in the fourth inning to raise his batting average to .314 with 39 RBI and a .925 OPS.

The Mets' J.D. Davis was hit in the back of the helmet by Tyler Chatwood's fastball in the ninth inning but stayed in the game.

Mets: RHP Jacob deGrom (right forearm tightness) will get another MRI on Wednesday and could be cleared to resume throwing by Dr. David Altchek if there's enough improvement. DeGrom has been out since July 7 and isn't eligible to return from the 60-day injured list until Sept. 13, but acting general manager Zack Scott doesn't anticipate him returning by that date. ... RHP Noah Syndergaard (Tommy John surgery) played catch Tuesday, and Scott was hopeful he could begin a minor league rehab assignment as soon as this week. ... INF Travis Blankenhorn was optioned to Triple-A Syracuse to make room for Lindor. ... RHP Yennsy Díaz was optioned to Triple-A on Sunday, and RHP Heath Hembree was added to the active roster Monday.