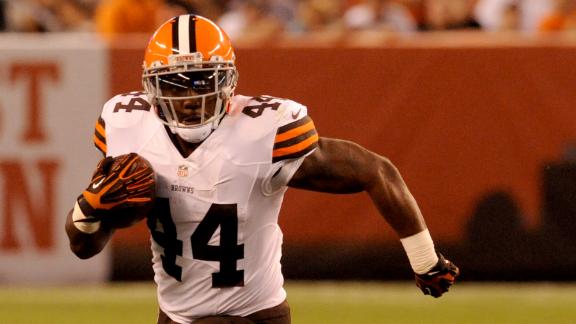 Browns coach Mike Pettine acknowledged Wednesday that Tate would miss Sunday's game against the Saints but wouldn't get into specifics.

"Ben Tate will miss some time with a knee sprain," Pettine said. "I'm not going to go into detail, whatever it is."

Which means he won't say more than he has to.

Pettine added that tight end Jordan Cameron and linebacker Barkevious Mingo are day-to-day with shoulder injuries. Pettine said he was not sure when Cameron might be available.

Tate signed with the Browns in the offseason with the reputation of a back who could run hard but was injury prone. He missed time with a rib injury in 2013 and missed his rookie season with a broken ankle.

He was injured late in the second quarter of the Browns' 30-27 loss at Pittsburgh.

Tate's last carry was a 25-yard run with 6:30 left before halftime. He went to the sideline and did not return.

In the game, Tate had six carries for 41 yards, including the 25-yarder.