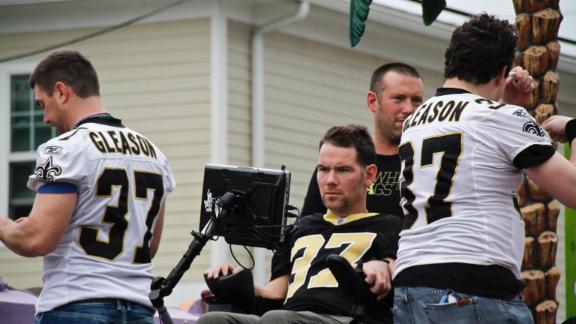 New Orleans Saints owner Tom Benson is donating $5 million to former Saints player Steve Gleason, whom he called an "NFL legend" for the way he and his Team Gleason charity are working to aid ALS patients and search for a cure.

Gleason, who was diagnosed with ALS in 2011, has become world-renowned for his diligent and innovative efforts to improve the lives of others with similar conditions.

Benson's donation will help to operate the Team Gleason House for Innovative Living, which is scheduled to open this summer in New Orleans. The house is only the second of its kind in the United States and will allow 18 patients with incurable neuromuscular disorders to live more independently.

"Steve is already defying odds," Benson said. "And through his work to find a cure for ALS, along the way he is making the lives of those living with ALS more meaningful and independent through the Team Gleason House.

"There is no better place than New Orleans, a city that now leads the way rather than follows. And there is no better person than Steve to inspire those living with ALS. This is one small gesture to help see this great project develop. Steve is part of the Saints family, but he is an NFL legend to those that he affects and we are most proud of him."

The news of Benson's donation was first reported by Peter King's themmqb.com.

Gleason told the website -- through technology that allows him to type with his eyes -- that he hopes there will one day be a similar facility in every NFL city.

"I believe this is an example of how players (ex-players in my case) and NFL organizations can unite to proactively address a problem that has not only affected the NFL but also tens of thousands of families around the country," said Gleason, who has never blamed football for his disease.

Gleason, who played with the Saints from 2000 to 2008 as a special-teams coverage specialist, was one of the team's most beloved players for his energetic style of play and the way he embraced the city off the field. He cemented his legacy with a memorable blocked punt against the Atlanta Falcons in the first game back in the Superdome following Hurricane Katrina -- a play that has been memorialized with a statue outside the stadium.

But the efforts of Gleason, his wife, Michel, and other members of Team Gleason since his ALS diagnosis have taken that respect and appreciation to a global level. He spoke to the United Nations last summer, was featured in an NFL Films documentary on an epic trip to Machu Picchu last year and was featured in the first-ever Super Bowl commercial for Microsoft earlier this year.