Bettors to stick with Packers as $300 ticket now worth $28K 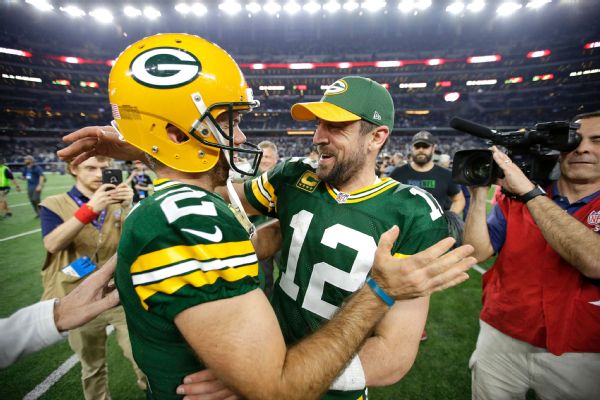 Before Thanksgiving, Brian Yankelevitz and Russ Axelrod decided to pick an NFL team that needed to win out to make the playoffs. They placed an initial $300 bet on this team, and the plan was to roll the winnings into another bet every week until it won the Super Bowl.

They chose the Green Bay Packers.

Sunday, the Packers won their eighth consecutive game, upsetting the Dallas Cowboys. Yankelevitz and Axelrod's initial $300 investment is now worth $28,213.60.

Even after turning $300 into nearly $30,000, they are sticking with their original plan. Less than an hour after the Packers defeated the Cowboys, Axelrod walked into the Aria Resort and Casino in Las Vegas, cashed the winning ticket vs. Dallas and placed the entire amount -- $28,213.60 -- on the Packers to beat the Falcons in the NFC title game Sunday.

If the Packers beat the Falcons, Yankelevitz and Axelrod will win $76,176.70 -- which they said will then be wagered on the Packers to win the Super Bowl against either New England or Pittsburgh.

Yankelevitz, 43, and Axelrod, 40, who are lifelong friends from Bayside, New York, said they've never considered cashing out or hedging their bet.

"It's more about the journey," Yankelevitz said. "Texting friends and conversations with friends than winning the bet."

Jay Rood, vice president of of race and sports books at MGM, which includes the Aria, confirmed that Yankelevitz and Axelrod's ticket is an active ticket at their books, although he declined to say who owns the ticket.

Axelrod said they initially chose the Packers because of an interview of Packers quarterbackAaron Rodgersafter a loss to the Redskins dropped Green Bay to 4-6.

This isn't the first year Axelrod and Yankelevitz tried this type of wager. Last year, they were a part of four friends who combined to put in $2,500 on the 3-7 Cowboys with plans to let each winning bet ride the following week to the Super Bowl.

In the first game they bet on Dallas, Tony Romo threw a pick-six on his second pass of the game and later broke his left collarbone. The Cowboys were routed by Carolina 33-14, and the friends' bet went up in flames after one game.

"Actually, I knew the bet was dead after about six seconds," Axelrod said.

Because it failed last year, two of the four friends decided not to participate this year, leaving only Yankelevitz and Axelrod. This year's original bet on the Packers was supposed to be only $200 -- $100 each -- but Axelrod decided to add $100 more when he got to the window.

Now the friends are two Packers wins from splitting between $150,000 and $200,000, depending on the Super Bowl odds. Each one of their bets has been on the money line (Green Bay simply has to win), with the Packers being an underdog in three of their eight wins.

Yankelevitz, who played college basketball at Long Beach State under current ESPN analyst Seth Greenberg and was an assistant coach at USF under Greenberg, lives in Orlando, where he works in corporate recruiting. Axelrod lives in Las Vegas, where he's a digital producer and consultant for media companies.

Both said they get mixed reactions from friends whether they should cash their ticket or let it ride.

"Brian and I are lifelong gamblers, the story is as good as winning the money," Axelrod said. "We won't pull a dime off the table, and there's no hedging on Super Bowl."

During the Packers' winning streak, Yankelevitz said he actually didn't watch two of the games, while Axelrod has watched every one.

If the Packers reach the Super Bowl, the two friends plan to watch the Super Bowl together with friends in Las Vegas. Although, Axelrod joked he might have to reconsider.

"The last time we watched something together, my horse [Axelrod owns part of a horse] finished dead last in the Breeders' Cup at Santa Anita," Axelrod said.

Axelrod added that if the Packers win the Super Bowl, he'll donate some of his winnings to Rodgers and kickerMason Crosby's favorite charities.