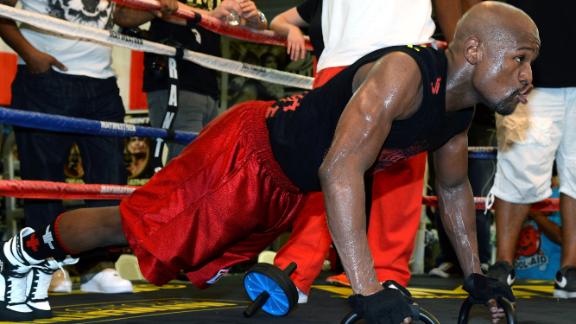 LAS VEGAS -- Floyd Mayweather Jr., already the highest-paid athlete in the world for 2013, is off to a great start for 2014.

Mayweather will earn a minimum guaranteed purse of $32 million for his welterweight unification fight with Marcos Maidana of Argentina on Saturday night (Showtime PPV, 9 ET) at the MGM Grand Garden Arena, according to contract figures released on Wednesday by the Nevada State Athletic Commission.

"It's just a testament to what he brings to sports, not just boxing," said Leonard Ellerbe, Mayweather's close friend and chief executive of Mayweather Promotions. "He's a terrific entertainer and he is the reason why this arena will be packed and why there will be a million-plus (buys on pay-per-view) -- because it's all about the Mayweather experience."

Mayweather's take likely was much greater in 2013 -- some estimate more than $90 million -- because he controlled virtually all of the profit from the events beyond his purse guarantee, and the Alvarez bout set the all-time boxing revenue record for domestic pay-per-view ($150 million) and live gate (just over $20 million).

Maidana's official purse is a career-high $1.5 million, but he also will earn more. He will make additional money from Argentina television rights and also has a chance to earn additional money depending on how well the pay-per-view performs.

For the welterweight co-feature, former junior welterweight titlist Amir Khan's official purse is $1.5 million and former welterweight titleholder Luis Collazo will make $350,000. The winner will be a top candidate to face Mayweather in the fall if he beats Maidana.

In the opening fight on the pay-per-view, super middleweight prospect J'Leon Love will make $100,000 and Marco Antonio Periban will earn $35,000.