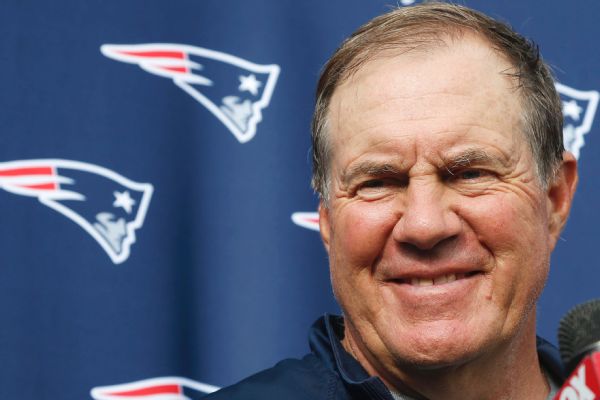 FOXBOROUGH, Mass. -- Bill Belichick is a grandfather for the first time, and the New England Patriots' head coach proudly announced the news in a unique way at the beginning of his conference call Tuesday morning.

"We have a roster addition to announce this morning, which is a little different than the usual one. The emphasis would be on little," he said. "We can add newborn Blakely Rose to the depth chart. She was born this morning to my son Steve and the real MVP, Jen. So this is a happy and exciting day for all of us."

Steve Belichick is in his fifth season as a Patriots assistant. He currently serves as the team's safeties coach.

Bill Belichick's two other children, Amanda and Brian, also have pursued careers in sports. Amanda enters her second season as the Holy Cross women's lacrosse coach, and Brian is in his first season as a Patriots scouting assistant.

In a lighthearted moment on the conference call, the 64-year-old Belichick was asked for the height-weight-speed scouting report on Blakely Rose. As one would expect, he had them at the ready: 20 inches, 7 pounds.

Along those lines, while running back Dion Lewis (knee) and offensive guard Tre' Jackson (knee) are eligible to begin practicing after opening the season on the physically unable to perform list, Belichick said "probably not this week" when asked if there were plans to have them back on the field.

Finally, after experiencing issues with sideline communication devices during Sunday's home victory over the Cincinnati Bengals, he spoke passionately about his frustration.

"As you probably noticed, I'm done with the tablets," Belichick said. "I've given them as much time as I can give them. They're just too undependable for me. I'm going to stick with pictures, which several of our other coaches do as well because there just isn't enough consistency in the performance of the tablets and I just can't take it anymore."

During the Patriots' 16-0 loss to the Buffalo Bills on Oct. 2, Belichick was seen on the television broadcast slamming a tablet down with force, sparking Bills offensive lineman Richie Incognito to joke on his Instagram account.

As for the communication between coaches in the press box to the sideline, as well as the coaching signal-caller to the huddle, Belichick said that technological devices "fail on a regular basis."