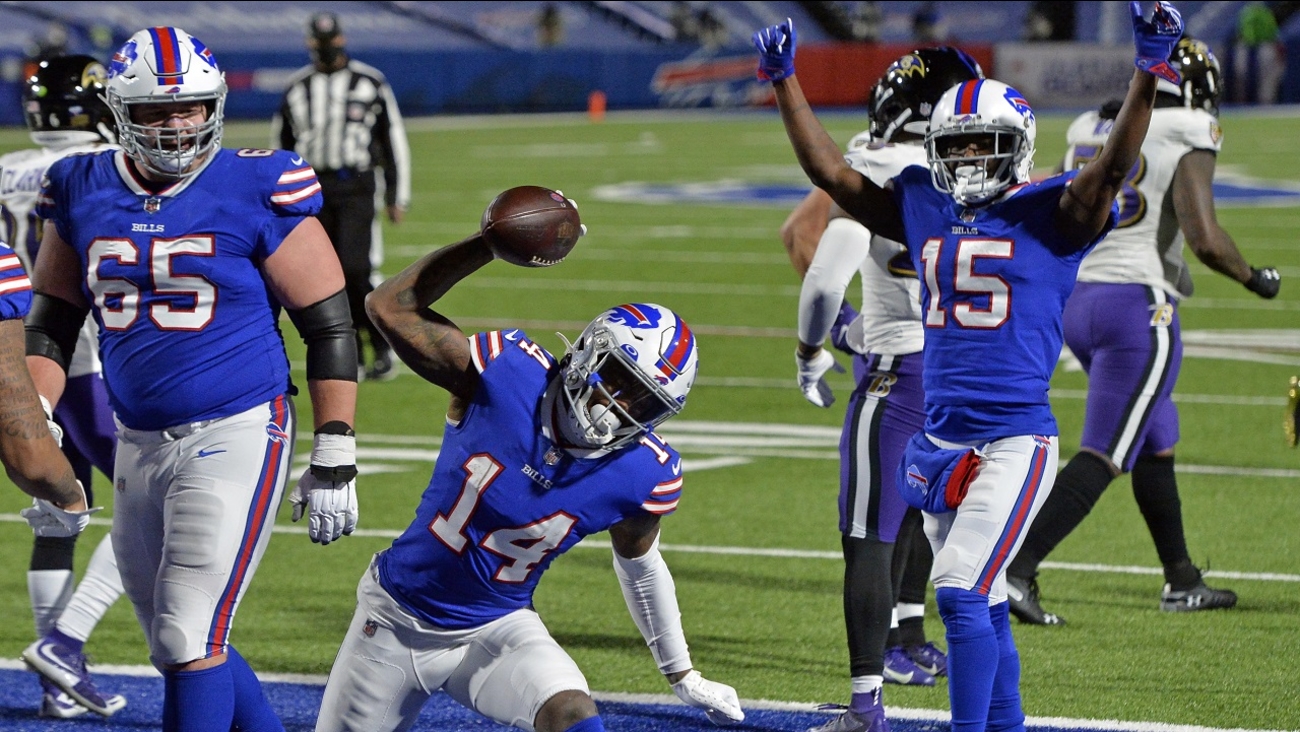 ORCHARD PARK, New York -- Taron Johnson could've kept running into next week on a 101-yard interception that carried the Buffalo Bills to their first AFC championship game appearance in 27 years.

Johnson's pick-6 of Lamar Jackson's pass with 41 seconds remaining in the third quarter secured a 17-3 win over the Baltimore Ravens in a divisional-round playoff game Saturday night.

The interception return matched the longest in NFL history and punctuated a stellar defensive outing in which Buffalo (15-3) limited the NFL's top running offense to 150 yards on 32 carries.

Jackson was sacked three times and did not return after being evaluated for a concussion following the final play of the third quarter, and two plays after Johnson scored.

Facing second-and-10 at Baltimore's 25, center Patrick Mekari snapped the ball over Jackson's head. The quarterback turned and chased the bouncing ball down inside the 5, turned and quickly threw it away as Tremaine Edmunds had him by the legs and Trent Murphy fell down on top of him.

Jackson's injury left Tyler Huntley to finish the game after being promoted off the practice squad.

Buffalo's defense took the pressure off of a Josh Allen-led offense that was limited to 223 yards offense, and made up for rookie kicker Tyler Bass missing two of three field goal attempts - a 43-yarder that was wide right in the second quarter and a 44-yarder that sailed wide left with 5:30 remaining.

The game was decided in the third quarter, when the Bills went up 10-3 on Allen's 3-yard touchdown pass to Stefon Diggs to cap an 11-play, 66-yard opening drive.
Jackson responded by marching the Ravens 66 yards on 15 plays before throwing the interception while facing third-and-goal from the 9. Johnson jumped in front of the pass intended for Mark Andrews and took off up the right sideline. He followed teammate Tre'Davious White, who made sure Jackson didn't have an angle to push Johnson out of bounds.

Johnson, who also returned an interception for a score in a 26-15 win over Pittsburgh on Dec. 13, said he initially thought about going down after catching the ball, before seeing no one in front of him.

"I caught the ball and kind of looked down, but then I looked up and saw a whole bunch of green grass to that side of me," he said. "At that point, there's one person I have to beat. And that's No. 8 (Jackson)."

Johnson wasn't touched until a mob of Bills players jumped on his back and brought him down in the end zone.

The Bills advanced to the AFC championship game for the first time since 1994 on their way to making - and losing - their four consecutive Super Bowl appearance. Buffalo also extended a season in which it has broken numerous droughts by claiming its first AFC East division title in 25 years and, with last week's victory over Indianapolis, winning its first postseason game since the same year.

The Bills will play the winner of the AFC's other divisional playoff between Cleveland and Kansas City on Sunday.