Billy McKinney out 'at least a few weeks' with shoulder injury 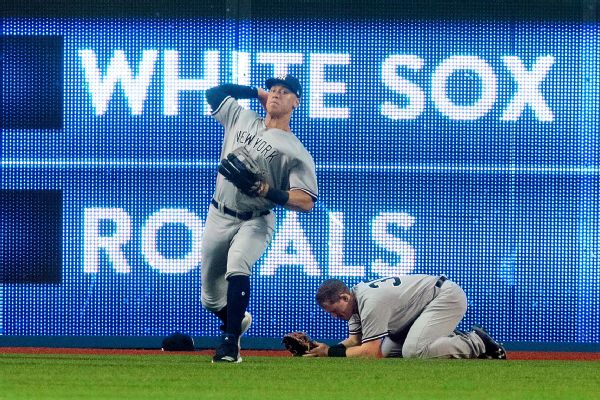 TORONTO -- Only three games into the season, the New York Yankees are dealing with some troubling injury issues that were compounded Saturday by a pair of early exits.

Just when the Yankees' outfield could ill afford to lose another player to injury, it lost one.

Billy McKinney, a young left fielder who was playing in his second major league game after making his debut Friday, exited Saturday's game against the Toronto Blue Jays in the first inning when he crashed hard into the wall in left-center while chasing down a fly ball.

Later in the game, reliever Adam Warren left with a right ankle bruise after being struck by a hard comebacker.

X-rays for McKinney and Warren were negative, but McKinney was diagnosed with a left AC joint shoulder sprain after being evaluated by Blue Jays orthopedist Dr. Jason Smith, and manager Aaron Boone said he will be out "at least a few weeks."

The Yankees will place McKinney on the disabled list and bring up infielder Miguel Andujar to take his place.

"We just feel like there's a place to get him some playing time right now," Boone said of Andujar getting the call from Triple-A.

Boone added that Andujar will give the Yankees someone to play third base and first base, and that he will get time as a designated hitter as they reshuffle their lineup.

McKinney tweeted to thank fans for their well-wishes.

Warren will be evaluated in the coming days as the Yankees try to access how to move forward either with or without him as a relief option.

The Yankees are reeling from a spate of outfielder injuries.

On Friday, center fielder Aaron Hicks went on the 10-day disabled list after developing a Grade 1 intercostal muscle strain in the area around his rib cage. He expects to return as soon as his DL stint ends. McKinney was called up Friday to take Hicks' place on the roster.

In addition to Hicks, the Yankees are without outfieldersJacoby Ellsbury and Clint Frazier, who got hurt early in spring training. Frazier suffered a concussion when he fell backward into a wall making a play. More than a month later, he still hasn't been cleared.

Ellsbury developed an oblique issue that has improved enough to allow him to appear in minor league spring training games in Tampa, Florida. The Yankees hope to have him back by the time his DL stint concludes Thursday when they host Baltimore, but they're not certain yet that it will happen.

"We've got to do what's best for the player," Cashman said. "If Ells is ready, we'll take him when he's ready. But we're not in a position right now to predict that he's going to be ready by Thursday. That's why we're going to continue to circle the wagons here the next coming days. We'll get a better feel for where he's at and what a more realistic timetable might be for his return, as well as access what other alternatives might be available internal or external in the meantime."

In the meantime, the Yankees will continue reworking the outfield. Saturday, they showcased a group that featured Aaron Judge in center field for the first time of his major league career and Giancarlo Stanton in right. Brett Gardner, who was to have the day off, ultimately played eight-plus innings in left after McKinney's departure.

As the Yankees explore emergency possibilities, both Boone and Cashman said 23-year-old Tyler Wade would see a position change. After earning a split of the second-base job coming out of spring training, Wade will be heading to the outfield to assist Gardner, Judge and Stanton, the only true outfielders remaining on the current 40-man roster.

Cashman said Wade is the "most realistic option we have" as an additional outfielder.

"I've already had a conversation with him that when that time comes up, you could see him in center field at some point," Boone said.