Blake Griffin to have elbow surgery 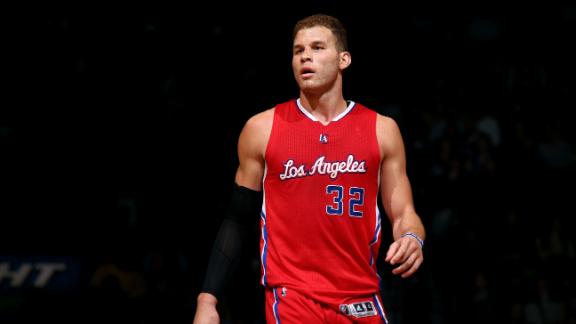 OKLAHOMA CITY -- Los Angeles Clippers star forward Blake Griffin has a staph infection in his right elbow and will be sidelined at least through the All-Star break.

The Clippers announced prior to Sunday afternoon's game against the Thunder that Griffin will undergo surgery Monday to remove the staph infection and will be re-evaluated after the All-Star break.

Griffin has had to deal with bursitis in his right elbow throughout his career and routinely has it drained during the course of the season. He most recently had fluid drained from the elbow Feb. 2, when the Clippers were in New York to play the Nets.

He wore a sleeve on his elbow after the procedure and struggled in Los Angeles' next two games. When the Clippers landed in Oklahoma City on Saturday, Clippers trainer Jasen Powell sent Griffin to the hospital to get his elbow examined.

"You could tell when something is infected. You can just look at it," Clippers coach Doc Rivers said Sunday. "With a bursa sac, it could just be that too, but it just didn't look right. [Powell] caught that and sent him early enough -- thank goodness."

There is no official timeline for Griffin's absence, but multiple team sources have told ESPN that the All-Star could be out between two and six weeks.

Griffin was walking around the Clippers' locker room before Sunday's game with his right elbow taped. He didn't speak to reporters but will be with the team Sunday before flying back to Los Angeles after the game.

"You're more concerned about him than anything else because infections are no joke," Rivers said. "You just have to be careful. Everybody's bodies are different with infections, and all infections are different. They're not even sure what antibiotics you give him yet. They have to do all the culture work and stuff. I don't know [how long he'll be out]. It could be a while."

The Clippers' leading scorer, Griffin is averaging 22.5 points, 7.5 rebounds and a career-high 5.1 assists per game this season. The All-Star forward was third in the league's MVP balloting last year.

Following Sunday's game, Los Angeles concludes its eight-game road trip Monday night against the Mavericks. The Clippers host the Rockets on Wednesday night in their final game before the All-Star break.

Spencer Hawes started in place of Griffin on Sunday against Oklahoma City, but Rivers said it would be a game-to-game decision based on matchups after that.

"It will be Spencer most nights," Rivers said. "But if a team has a different type of lineup, we'll change our lineup and have a makeshift lineup until we get Blake back."

After making it through the first 45 games of the season relatively injury free, the Clippers are now having to deal with the absence of two starters for an indefinite period. Guard J.J. Redick will miss his third straight game Sunday with back spasms.

The Clippers sustained another injury during Sunday's game when forwardGlen Davis was helped off the court with upper back spasms and did not return.

ESPN.com's Ramona Shelburne and The Associated Press contributed to this report.

Blake Griffin Will Have Elbow Surgery
ESPNLosAngeles.com's Arash Markazi discusses the staph infection that will keep Blake Griffin out until after the All-Star break.