Blatt: Cavs 'got to' finish second 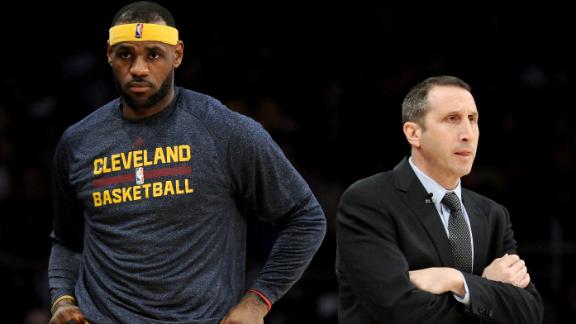 MIAMI -- After his team experienced just its second double-digit defeat of the past two months, Cleveland Cavaliers coach David Blatt laid out a directive for his squad as it enters the final stretch of the regular season.

"We got to finish in second place," Blatt said Monday after the Cavs' 106-92 loss to the Miami Heat.

Blatt was asked whether he would be willing to rest players over the Cavs' last 13 games of the regular season, much the way Kevin Love sat out against the Heat and against the Orlando Magic on Sunday, at the risk of falling in playoff positioning.

"So we're thinking about that," Blatt continued. "Where and if there is an opportunity to rest guys, we will."

Monday's loss put Cleveland two games ahead of Toronto for the No. 2 seed in the Eastern Conference. Eight of the Cavs' final 13 games are at home, and only five are against teams above .500 (Milwaukee twice, Memphis, Chicago and Washington).

LeBron James, who played against the Heat with a tweaked right knee, bothersome lower back and previously sprained right wrist that he reaggravated during a collision with Hassan Whiteside, continued to prioritize health over seeding for his team.

"The coaching staff, if that's what they want, but for me, I never play for seeding. I just play," he said. "And wherever at the end of the season we land, I'm ready. Just get me in the playoffs. Get me in the playoffs, I feel like I can win on anybody's floor. I feel like I can win at home. I'm that confident in my ability and our team's ability. So I've never in my 12-year career played for seeding. That's just not how I work."

One of the floors James and the Cavs might be tasked with winning on in the postseason is AmericanAirlines Arena, where Miami won both of its games against Cleveland this season. The Heat, at 30-36, are in a virtual tie with Indiana for the No. 7 seed in the East, which would mean a first-round matchup against the Cavs if they hold on to No. 2.

"I think their schedule is pretty favorable coming down the end, and I also think Miami is a good team, so they have a very good chance," Blatt said when asked to assess the Heat's playoff chances.

Of Miami's 16 remaining games, eight are at home, eight are on the road and eight are against teams above .500, including a rematch with Cleveland on April 2 at Quicken Loans Arena.

James said he has not thought about what a playoff series against his former team would be like, but he was pragmatic about the possibility of it.

"If it happens, it happens, then we got to go out there, and we got to prepare ourselves the best way," James said. "They are playoff-tested -- we're not. So it would be a tough challenge for us, and we'll be ready for it, if it so happens."

The Heat said that James' coming to town creates a different dynamic -- "It was a special game for a lot of guys in this locker room," Luol Dengsaid -- and alluded to how the energy in the building changes for Cavs games compared to those against any other opponent.

"When LeBron comes to town, it rallies the fans up," Whiteside said. "It's a different atmosphere, and we feed off that. He's a great player."

Asked his thoughts about a potential Heat-Cavs series, Blatt evaded the question.

"We're not talking about the playoffs yet because we got [13] more games to go," Blatt said. "We're fighting and will fight probably until the last days for what looks like the second position. We got to be thinking about that right now."

James has different goals for the Cavs in the last month of the regular season.

Blatt: Cavs Must Finish In Second Place
Tim Legler and Tom Penn react to Cavaliers coach David Blatt's statement that his team has to finish in second place in the East, and if there is an opportunity to rest guys, he will. 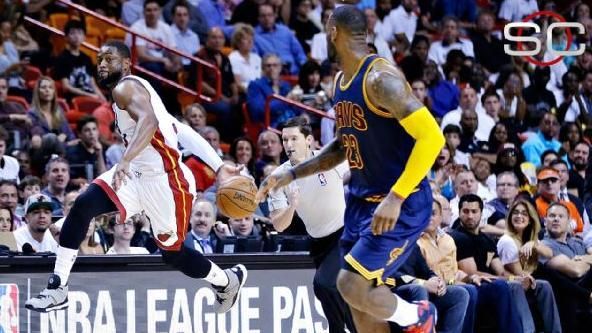