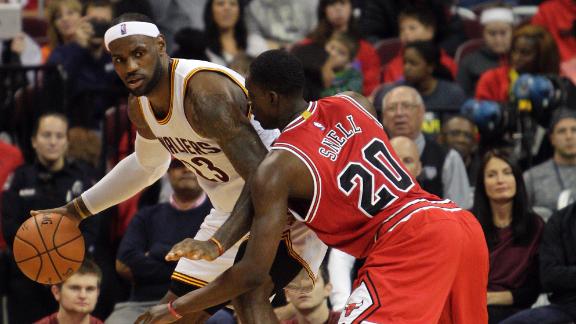 INDEPENDENCE, Ohio -- Lofty expectations are unavoidable for the Cleveland Cavaliers this season, but new coach David Blatt says the burden of his team being considered a championship-or-bust squad is unjust.

"Anybody talking about us winning it all, I think they're being unfair to those great NBA teams that are out there that have either won it or have been there to win it, and also to us as a team that's talented but new," Blatt said Tuesday, two days before the Cavs' season opener Thursday at home against the New York Knicks. "We have a lot of work to do before we can start claiming anything before it's time."

There are plenty of people talking about Cleveland, of course. After a summer in which the Cavs landedLeBron James and Kevin Love as well as veteran support from championship-tested players such as Shawn Marion and Mike Miller, they are the favorites this season whether they like it or not.

According to the Westgate Las Vegas SuperBook, Cleveland has 5-2 odds to win it all, followed by the San Antonio Spurs (3-1), Oklahoma City Thunder (9-2),Chicago Bulls(6-1) and Los Angeles Clippers (8-1) rounding out the top five.

The Cavs were also the most popular pick to win it all by a panel of 28 NBA contributors on ESPN.com, receiving 14 votes, followed by the Spurs (9), Thunder (3), Golden State Warriors (1) and Clippers (1).

At least one of Blatt's players is following the coach's lead in trying to tamp down expectations as the season draws near.

"We haven't done anything yet," said Dion Waiters, usually one of the more vocal members of the Cavs. "You got to look at the Spurs, teams like that, who won the championship last year and got every guy back. We got to look at teams like that. We can't just come into the game thinking everything is going to be easy. We know everybody is going to be gunning for us. That's what makes it fun though, just to go out there and we know we're going to get everybody's best shot."

Blatt also expressed appreciation for San Antonio, speaking in reverent tones about the five-time champs, who are going for their first repeat title of the Gregg Popovich era this season.

"They played beautiful, winning basketball and that's been a team that over the years has not only been successful but has contributed to the style of play that I think is becoming more and more prevalent NBA-wide," Blatt said. "I give Coach Pop and the players of San Antonio a lot of credit for the style that they play and for the willingness on the part of the players to be non-ball-dominant and to play together."

Waiters, who admitted he "freelanced" during his first two seasons in the league rather than lean on film study to prepare for games, said even he tried to watch the Spurs play during the preseason to pick up on what makes them so successful.

"San Antonio, how they just pass the ball, it's unbelievable," Waiters said. "And they play as a team. They don't really care who got 40 [points] or who got 15 assists. You would never know with that team. They all just play together, they clap for one another. Just the little things that makes them a great team."

The Spurs have history with James and the Cavs. They swept Cleveland in the 2007 Finals and beat James last June when he was with Miami to avenge a crushing Game 7 loss in the 2013 Finals to James and the Heat.

Just how close does Blatt think the Cavs are from being worthy of championship consideration?

"We're going to see," Blatt said. "Obviously now that the real games are getting started, we're going to find out. I thought we showed in preseason that we're a pretty good, competitive group and we played some good teams. But, there's a big difference between preseason and regular season -- we all know that -- for everyone. But we got the right kind of personalities and the right kind of character guys to certainly get out there and make an effort every night.

"We're talking about being the best team that we can be and progressing day to day and hopefully putting ourselves in a position where we can compete with anyone."