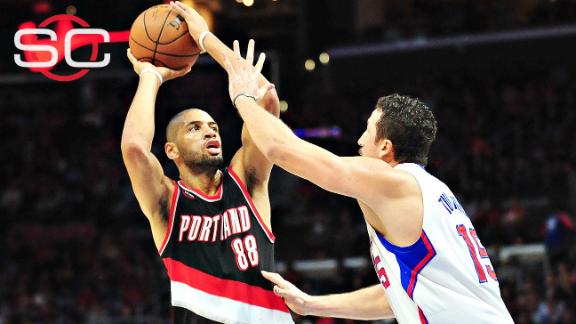 CHARLOTTE, N.C. -- The Charlotte Hornets continue to revamp their roster after a disappointing season in which they didn't shoot the ball well and failed to make the playoffs.

Portland's impetus to trade Batum was in part due to uncertainty about the free-agency intentions of All-Star forward LaMarcus Aldridge, sources told ESPN.com's Marc Stein. Portland, according to league sources, is becoming increasingly doubtful of its chances to re-sign Aldridge, who is, in turn, not expected to re-sign with Portland, sources close to Aldridge told ESPN.com's Chris Broussard.

Aldridge is expected to be courted most heavily by the San Antonio Spurs, Dallas Mavericks and Los Angeles Lakersand will consider signing with one of those three teams, the New York Knicks or the Atlanta Hawks, sources said.

The deal comes nine days after the Hornets sent Lance Stephenson to the Los Angeles Clippers for Spencer Hawes and Matt Barnes.

"We felt like we needed some more shooting and we feel like we have addressed that," Hornets general manager Rich Cho said.

Cho added that the Hornets probably aren't done wheeling and dealing as they attempt to upgrade their shooting.

"We are still looking to do a number of different things," Cho said.

Cho said he expects Batum will start at the 2-guard spot while Michael Kidd-Gilchrist will remain at small forward.

He also has averaged 6.4 rebounds and 5.0 assists per game over the past three seasons. According to ESPN Stats & Information, that makes him one of three NBA players to average at least six boards and five assists over that span. The other two players: LeBron James and Russell Westbrook.

The Hornets finished last in the NBA last season in 3-point shooting and are hoping Batum can help them take pressure -- and double-teams -- away from center Al Jefferson in the low post. The 26-year-old Batum is a career 36 percent 3-point shooter, although he shot a career-low 32.4 percent last season.

From France, Batum has started 428 regular-season games and 27 postseason games. He has averaged 11.2 points, 5.1 rebounds and 4.8 assists during his career, and gives the Hornets some needed playoff experience.

"He provides a 3-point shooting threat and he's good versatile defender who can guard multiple positions," Cho said. "He has been in the league for seven years, so he gives us experience. But yet he is still in his prime. He is going to be a great addition to this team."

Charlotte had hoped Stephenson would fill that role this past season, but he was a major disappointment. Stephenson shot 17.1 percent from 3-point range, the worst in NBA history.

Batum is entering the final year of his contract and will make $11.8 million this season.

"Nic Batum was a key contributor to all of our recent success," Blazers president of basketball operations Neil Olshey said in a release Wednesday. "He will truly be missed as a person and a player. We wish Nic all the best for the future."

Henderson was the longest-tenured player on Charlotte's roster, joining the team as a first-round draft pick in 2009 out of Duke.

He had opted to pick up the final year of his contract last week and will make $6 million this season. He could replace Wesley Matthews, who is a free agent.

Henderson, 6-5 and 220 pounds, started 72 games last season and played in 80, averaging 12.1 points and 3.4 rebounds. He shot 33.1 percent from beyond the 3-point arc. Henderson's scoring output dropped off last season after he averaged at least 14 points in each of the previous three seasons.

The 6-10, 215-pound Vonleh was considered a project when the Hornets took him with the No. 9 overall pick in 2014 draft out of Indiana.

Coach Steve Clifford repeatedly said the 19-year-old Vonleh wasn't ready for the NBA and that he wouldn't see much action until he had time to develop. Vonleh played in 25 games last season, most of those late in the season. He averaged 3.3 points and 3.4 rebounds per game.

Cho said he hated to trade Vonleh so early in his tenure with the Hornets but added, "You have to give up something to get something."

Clifford said last season the team needed to get taller.

The Hornets have done that.

Hawes is 7-foot-1, and Batum is larger than most shooting guards in the league.

"We feel like we added some size and versatility throughout," Cho said.

Sources told ESPN.com that in a separate trade, the Hornets acquired Jeremy Lamb from the Oklahoma City Thunder, confirming an earlier report by the Charlotte Observer. In return, the Thunder get the rights toMatt Barnes, according to a source.

The Hornets had acquired Barnes in the Stephenson trade with theClippers.Barnes' contract is only partially guaranteed, and Charlotte had been expected to waive the veteran small forward.

Information from ESPN.com's Marc Stein and Ramona Shelburne and The Associated Press contributed to this report.