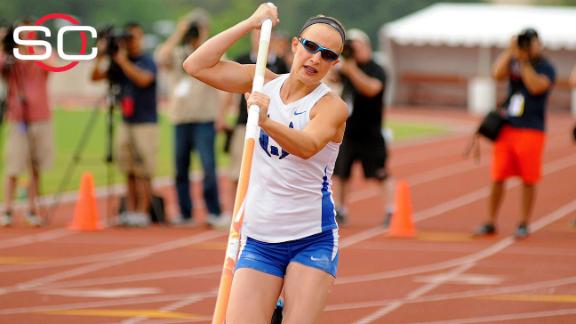 AUSTIN, Texas -- For three years, Charlotte Brown has been chasing a medal by trying to jump over a bar she couldn't see.

The senior pole vaulter cleared that bar Saturday, earning a third-place finish at the Texas state high school championships. And proudly joining her on the podium as the bronze medal was draped around her neck -- her service dog Vador.

Brown is blind, yet that's not stopped her quest to become one of the best in an event that would seem next to impossible.

"I finally did it," Brown said. "If I could send a message to anybody, it's not about pole vaulting and it's not about track. It's about finding something that makes you happy despite whatever obstacles are in your way."

Brown had qualified for the state meet each year since 2013 with Emory Rains High School. She finished eighth as a sophomore and improved to fourth as a junior.

At her hotel room Friday night, Stori Brown tried to counsel her daughter that it was important to remember that she was one of the few to make it this far, whether she won a medal or not.

"No," Charlotte replied. "I need to be on that podium."

Brown was born with normal vision, but developed cataracts when she was 16 weeks old. That led to the first of several operations, including insertion of artificial lenses. Her vision stabilized until she was about 11 when it started to worsen.

By 2013, she still had pinhole vision but couldn't see color or distinguish shape from shadow. Brown is now blind. While not faced with total darkness, her mother described what remains as a "jigsaw puzzle" of mixed up shades of light and dark.

Despite her disability, Brown takes pride in her fierce spirit of independence, born out of growing up in a family with two older brothers who pushed her to help herself in the rural town of Emory, about 76 miles east of Dallas.

"If there's a way to do something for yourself, that's a good idea," she said. "When I need to know if my socks match or not, it's a good time to ask for help. Can't find Waldo? Probably need to ask for help."

Run down a track and hurtle herself more than 11 feet into the air? No problem.

Brown first took up pole vaulting in seventh grade because she wanted something a little "dangerous and exciting." She competes with a combination of fearless abandon and meticulous attention to detail. She counts the seven steps of her left foot on her approach, listening for the sound of a faint beeper placed on the mat that tells her when to plant to pole and push up.

On Saturday, Vador walked her to the warm-up area and stretched out behind the jumpers as they went through each attempt.

Brown missed her first attempts at 10-0 and 10-6 but cleared both on her second try. She cleared 11-0 on her first attempt, then soared over 11-6. She secured a medal when two other vaulters bowed out at that height, leaving Brown among the last three in the field.

She made three attempts at 11-9 but missed each one. She briefly slumped her shoulders and shook her head after her final attempt, then got to her feet to acknowledge the standing ovation from several hundred fans she could hear but not see.

"She came to win," said her father, Ian Brown. "As parents, we are thrilled she got on the podium."

Brown medaled in a talented field. Sydney King, who won gold at a height of 12-3, has signed with Oklahoma to pole vault in college.

"I don't how many people do could that," King said. "Her story, she's what keeps me going when things aren't going right for me."

Brown is headed to Purdue on an academic scholarship and plans to walk on in track. Her brother Lachlan is a hurdler for the Boilermakers.

"It took me three years to get on the podium, and I finally did it," Brown said. "This story ... really wasn't about me. It was about everybody that struggles with something."