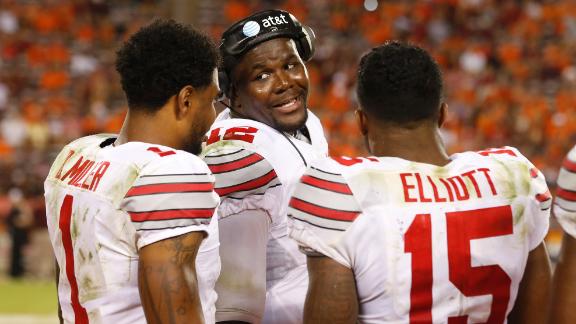 BLACKSBURG, Va. -- Braxton Miller has clearly found a new home at wide receiver, and No. 1 Ohio State has found another dangerous weapon.

Not what the rest of the college football world wanted to hear.

Miller scored two touchdowns -- one on a 54-yard catch-and-run where he had to tip-toe down the sideline, the other on an electrifying 53-yard run -- and the star-studded Buckeyes began their title defense with a 42-24 victory over Virginia Tech on Monday night.

"I really would have preferred that third quarterback be over competing for a quarterback job rather than out there as an athlete,'' Virginia Tech coach Frank Beamer said as the Hokies fell to 0-9 against teams ranked No. 1. "I thought he was pretty special.''

Miller made a diving 24-yard reception for his first catch since moving to wide receiver, and he only got better as the night wore on. His touchdowns came after the Hokies had taken a 17-14 lead into halftime, the long run including a spin move that left defenders falling down.

Wide receiver Michael Thomas watched it happen, and said he thought: "There he goes. That's Braxton.''

Miller said he set the defenders up for the spin move, which allowed him to run free to the end zone.

"I definitely did. I set them up,'' he said. "I acted like I was looking straight but I seen them out of the corner of my eye.''

And Miller wasn't alone in turning heads. Cardale Jones picked up where he left off last season by throwing for two touchdowns and running for a third, and tailback Ezekiel Elliott was virtually untouched in breaking off an 80-yard run and gained 122 yards on just 11 carries.

But it was Miller who stood out most. The Big Ten offensive player of the year as a quarterback in 2012 and 2013, Miller missed last season with an injury to his right throwing shoulder. When he was slow to heal, he removed himself from the three-way quarterback battle.

"This kid's all about the right stuff and I'm honored to coach him again for a fourth year. I love this guy,'' coach Urban Meyer said.

The Buckeyes avenged a 35-21 home loss to Virginia Tech last season and earned their 14th straight win overall. The Hokies, meanwhile, lost more than the game, with quarterback Michael Brewer shelved by a broken left collarbone that stalled any hope of a comeback.

Trainer Mike Goforth said Brewer will have surgery Tuesday and set the recovery time at "four to six weeks, maybe as many as eight.''

The Hokies trailed 21-17 and had driven into Buckeyes territory when Brewer went down, but had trouble moving the ball after Brenden Motley took over behind center. Motley did lead one late touchdown drive, hitting Isaiah Ford from 17 yards, but by then it was long over.

"I feel for Michael,'' Beamer said. "You're talking about a guy who puts so much into it ... and then after one play he's done for a while.''

And the Hokies just couldn't stop Miller and Co. in the second half.

Miller first had the 54-yard touchdown reception where he nearly stepped out of bounds and tight-roped along the sideline, erasing a 17-14 halftime deficit. Then he had the spin move that Jones said let him know, "he's back.'' The run made it 28-17 with 2:05 left in the third.

Jones added a 10-yard TD run in the fourth, and Barrett, who started for Ohio State until he was injured late in the season last year, threw a 26-yard touchdown pass to a wide-open Thomas with 8:14 remaining.

The Buckeyes got off to a fast start, but the Hokies battled back. Curtis Samuel made a great adjustment to haul in a 24-yard touchdown reception from Jones, and Elliott's run made it 14-0.

Virginia Tech responded with 17 straight points. Sam Rogers took a short pass from Brewer 51 yards for the Hokies' first touchdown. Virginia Tech then used an interception to set up a field goal and a fumbled punt to set up a go-ahead touchdown 15 seconds before halftime on Brewer's second touchdown pass. 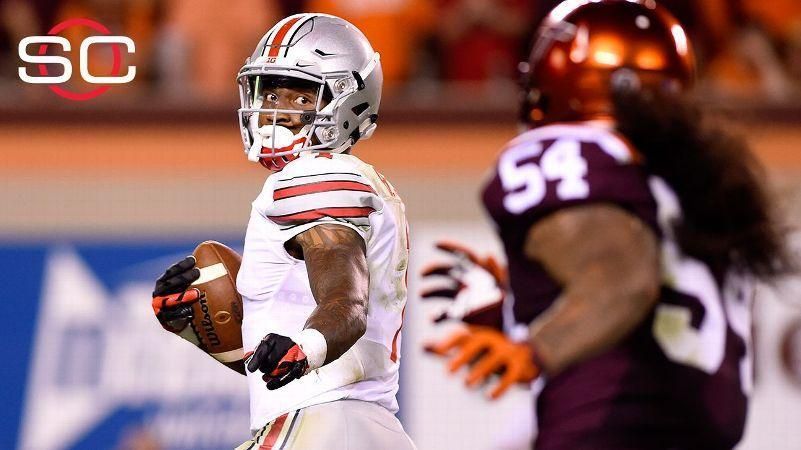