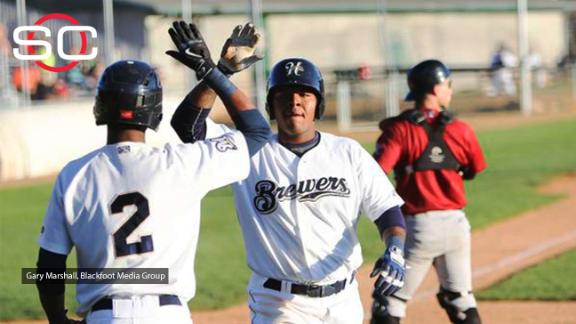 David Denson, a member of the Milwaukee Brewers' affiliate in the rookie Pioneer League, has a way to go before reaching the major leagues.

But if he climbs the ranks and joins the big league club, Brewers manager Craig Counsell and players told the Milwaukee Journal Sentinel that Denson would be welcome in their clubhouse.

Denson announced Saturday that he is gayin an interview with the Journal Sentinel, becoming thefirst openly gay active player on a team affiliated with Major League Baseball.

"I think everybody is supportive," right fielder Ryan Braun told the newspaper. "Overall, we realize it's a courageous decision by him, to come out and embrace his true self."

In a statement Sunday, the Brewers lauded Denson as a "highly respected member" of the Brewers family.

"Our goal for David is to help develop him into a major league player, just as it is for any player in our system, and we will continue to support him in every way as he chases that dream," general manager Doug Melvin added.

MLB said it backs Denson's decision "to share his personal story and wishes him continued success with his goal of becoming a major leaguer."

The league added that is "very proud" of the Brewers organization and that this disclosure represents a "tremendous example of baseball's desire to give every player the opportunity to play at their very best."

Brewers second basemanScooter Gennett played with Denson while he was on a minor league rehab with Class A Wisconsin earlier this season. Gennett told the Journal Sentinel that Denson is "a great guy, an awesome guy."

"Now he'll be able to focus on playing and not focus on all the other stuff. This will be less clutter for him," Gennett said. "I think it's a great thing when people can clear their mind and just be honest with people around them."

Denson was picked by Milwaukee in the 15th round of the 2013 draft from West Covina, California. He has split his time this year, starting and struggling at Wisconsin before being sent back to the rookie-level Helena team. He told his teammates there that he is gay about a month ago, according to the newspaper.

While the first baseman has tried to downplay his coming out, Counsell commended Denson for doing something courageous.

"It's not easy trying to become a major league baseball player, and I'm sure it hasn't been easy dealing with everything he has had to deal with up to this point," Counsell told the newspaper. "Hopefully this kind of gets something out of the way that allows all of his talents to shine through."