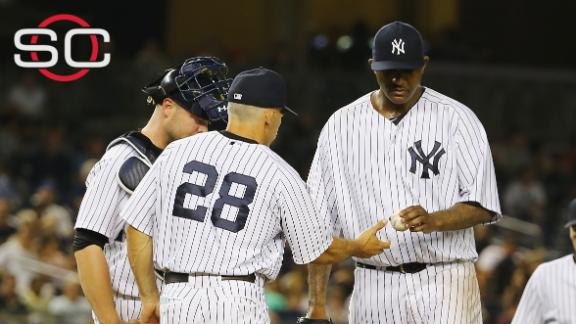 "There is a strong possibility that there might not be anything that makes sense for us," Cashman told ESPNNewYork.com on Monday.

While acknowledging his team is not perfect, Cashman says he likes the makeup of the Yankees, who own a four-game lead in the AL East. Cashman realizes there are elite starting pitching upgrades on the market, but he is very hesitant to trade his top prospects -- especially Triple-A outfielder Aaron Judge or starter Luis Severino -- to acquire any of them.

Cashman's bullpen is pretty much set with Dellin Betances and Andrew Miller locking down the end of games. As for his everyday lineup, Cashman is very aware that second baseman Stephen Drew's .181 average is not good enough, but the market for that position is very thin.

"On the position player side, people would want to point to second base, and understandably so," Cashman said. "But then if you look at the marketplace of available players, it is not a great market.

"We do have an internal candidate [Rob Refsnyder] who is trying to push his way into the mix. So I don't know what is going to happen. There is a strong chance that we won't do anything because of what is coming in the near term and the far term. At the same time, I am engaging all clubs to see what is available."

The Yankees sent down Refsnyder on Sunday after he started four games in a row. In doing so, the Yankees chose to have Refsnyder continue to develop at Triple-A while hanging on to reserve infielder Brendan Ryan, whom they would have had to designate for assignment.

"We were faced with the decision of having to vote someone officially off the island and chose to keep all assets in place for us until we get to the deadline," Cashman said. "I can get Refsnyder back. I can't get somebody back if I have to designate them for assignment."

Cashman feels he has depth with his starting pitching. After aces Michael Pineda and Masahiro Tanaka, the Yankees have Ivan Nova, CC Sabathia and Nathan Eovaldi.

"If you are focusing on: Are there going to be available starting pitchers [that] are better than what we have? Yeah, but will they be worth the price tag to acquire on a short-term rental, for instance?" Cashman said. "Is it worth the overall cost of some of the talent we have coming? That is what we would wrestle with. There are certain players that we do not want to move.

"I have Nova, who just came back, and is pitching well. I have [Adam] Warren, who was pitching well, had to go to the pen to make room. CC is pitching better. I have [Bryan] Mitchelland Severino blowing gas at Triple-A. So I have depth. You could make arguments that there are certain guys that are better, but I'd caution people of the price tag for acquiring those guys might be detrimental."

Cole Hamels and Johnny Cueto are among the starters who could be available. The Yankees are unlikely to take on Hamels' contract because they are trying to be smarter with their spending under Hal Steinbrenner, while Cueto falls into the rental market that Cashman seems hesitant to jump into.

"There is a strong possibility that there might not be anything that makes sense for us," Cashman said. "I do like the chemistry in this clubhouse. I do like the personnel that we have. I recognized that we all have our flaws and defects and areas that could be better, but in some cases, you might not be able to address them because of availability just doesn't exist. Or you may not be able to address them because you don't want to step up and overpay to get them done. Those are things I will be discussing with ownership and certainly will take their lead and engage 29 other clubs. It is easier to predict no activity than significant activity. We'll see."