Brian Vickers out with blood clots 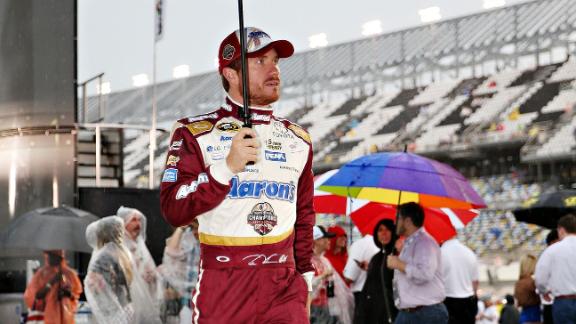 FONTANA, Calif. -- Brian Vickers will miss the Sprint Cup Series race this weekend because of a recurrence of blood clots, and Michael Waltrip Racing development driver Brett Moffitt will replace him for the Auto Club 400.

Vickers has battled blood clots since 2010, and this will be the fourth time he has been sidelined. He missed the first two races of the season after having heart surgery in December because his body was rejecting a patch that was inserted in his heart in 2010 to help keep the clots from recurring.

"We don't know how long he will be sidelined," Waltrip said.

Vickers, 31, has started to take blood thinners and cannot race while on them.

"Thankfully, because I recognized the signs and symptoms, the doctors caught this early and I'm going to be OK," Vickers said in a statement. "I had finished my treatment for the clot I had in my leg back in 2013, and I haven't needed to be on a blood thinner for a clot in my leg or lung since.

"Now I won't be able to race because I'll need to be back on a blood thinner. I'm going to follow doctor's orders and do everything I need to do to get well."

Moffitt, who was eighth at Atlanta in place of Vickers, will be the driver "for the foreseeable future" as long as Vickers is out, Waltrip said.

"He fits in Brian's seat so there's no issues at all with getting Brett into the car," Waltrip said. "He's never run a lap here at California Speedway. That is going to be fun to watch. ... We're going to get through this weekend and we're going to have a plan next week to share with everyone."

Vickers was being treated Friday by doctors in Los Angeles. Waltrip and team executive vice president Ty Norris said Friday morning they would let Vickers discuss where the clots formed.

"We haven't had any direct conversations with the doctors," Norris said. "We'd have to have that with Brian's permission. And right now we've said, 'Brian, you just take care of your business.'"

No reason was giving for the recurrence of the blood clots. In 2010, the clots formed after Vickers was immobilized following a crash at Talladega and spent considerable time on a plane. In 2013, he sprained his right foot in a crash at Bristol and it was immobilized in a boot.

Ironically, Vickers has Janssen Pharmaceuticals as the sponsor this week on his car.

"I'm disappointed I can't be there, but if there is a silver lining in all of this, hopefully what's happened to me will help raise awareness on this important health issue," Vickers said.

Vickers is in the second and final year of his contract with MWR, and this latest setback no doubt will fuel speculation that he might never race again.

"He feels really good," Waltrip said. "And he is really sad. ... I just know his heart and his passion. He would not say that [this is the end], and so therefore I can't say that. I guarantee he would tell you he would be back in a couple of weeks or a couple of months, whatever the decision that comes from his doctors that it will be.

"He certainly has overcome a lot. I expect him to be able to overcome this. Obviously, this is a setback for our team and for Brian, but I think this morning we're just glad Brian is OK."

Moffitt, who replaced Vickers in the race at Atlanta, was supposed to drive the Front Row Motorsports No. 34 car this weekend at Auto Club Speedway. Moffitt will be replaced by Roush Fenway Racing development driver Chris Buescher.