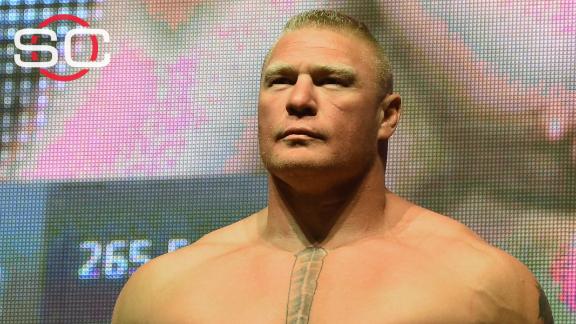 Lesnar, 39, returned to the Octagon for the first time since December 2011 to defeat Mark Hunt via decision. The pro wrestling star remains under contract with WWE and declined to say whether he would fight again.

"The UFC organization was notified today that (USADA) has informed Brock Lesnar of a potential anti-doping violation stemming from an out-of-competition sample collection on June 28," the statement said. "USADA received the testing results from the June 28 sample collection from the WADA-accredited UCLA Olympic Analytical Laboratory on the evening of July 14."

Under the UFC's anti-doping program, which is administered by USADA and went into effect in July 2015, results management and adjudication of the case falls to USADA, as well as the Nevada State Athletic Commission, due to the fact Lesnar's fight took place in Las Vegas.

The NSAC is already involved in another case regarding UFC 200. Former light heavyweight champion Jon Jones, who was removed from UFC 200 three days prior to the event due to a potential violation, is also facing discipline from the NSAC.

It is standard procedure for USADA to not divulge the cause of the potential doping violation immediately.

Lesnar (6-3) announced his retirement from mixed martial arts in 2015, but ultimately decided to return to the UFC for a "one-off," which WWE agreed to.

Under the UFC's program, any retired athlete who wishes to return to competition must be subjected to a four-month testing window first.

The UFC is able to grant exemptions to that requirement, however. Due to the unique circumstances of his return and his contract situation with the WWE, the UFC decided to waive that four-month window for the first time. Hunt, 42, referenced that exemption numerous times leading up to the fight.