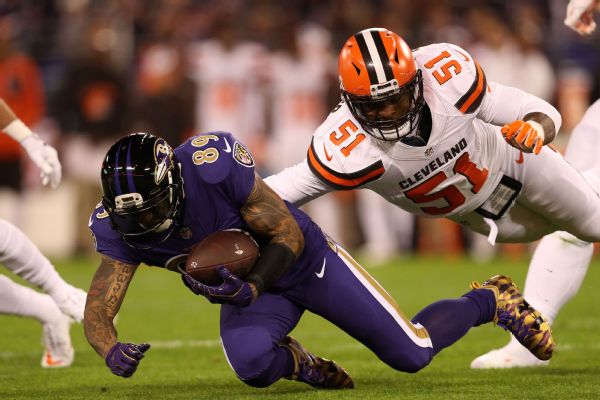 The Cleveland Brownshave kept one of their own.

Linebacker Jamie Collins has agreed to a four-year contract extension, the team announced Monday. A source told ESPN that the deal is worth $50 million, with $26.5 million guaranteed.

The $12.5 million average per year makes him fourth among NFL linebackers, behind Von Miller, Justin Houston and Clay Matthews.

Collins was acquired from New England in a trade midway through the 2016 season. The new contract will keep Collins off the free-agent market, and is an important step for a team that lost four starters on the first day of free agency a year ago.

"We are going to be aggressive about acquiring talent, and when we had the opportunity to trade for Jamie back in October, it was done with the intent of him becoming a long-term part of our defense," executive vice president of football operations Sashi Brown said in a statement released by the team.

"Jamie has shown throughout his NFL career that he is a very talented player with a rare skill set that allows him to impact games in a number of ways. He's a versatile, smart, competitive and physical football player who has experienced winning at the highest level."

Coach Hue Jackson said in the statement that Collins is "an outstanding football player and a guy we think can be part of the foundation of a tremendous defense."

Collins started eight games for the Browns after being acquired for what will likely be a third-round compensatory draft pick. In those eight games with Cleveland, he had 69 tackles, seven tackles for loss, two sacks and one forced fumble.

The Browns finished the 2016 season with one win; New England will play in the Super Bowl against Atlanta.